"Out of Gas: The End of the Age of Oil", by David Goodstein

Here is what sounds like another excellent book about our impending energy crises. This (to me) is a far greater danger than "global warming". See also the following review from Amazon.com
Peter 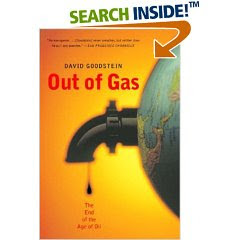 
September 10, 2006
By
Dennis Littrell (SoCal) - See all my reviews For those of you who are just getting interested in the subject, David Goodstein's Out of Gas is the book you want to read first. I have read several books on the impending energy crisis, including:

Deffeyes, Kenneth S. Beyond Oil: The View from Hubbert's Peak (2005)

Heinberg, Richard. The Party's Over: Oil, War and the Fate of Industrial Societies (2nd Ed., 2005)

Huber, Peter W. and Mark P. Mills. The Bottomless Well: The Twilight of Fuel, the Virtue of Waste, and Why We Will Never Run Out of Energy (2005)

Simmons, Matthew R. Twilight in the Desert: The Coming Saudi Oil Shock and the World Economy (2005)

and I can say that Professor Goodstein's modest, short and very much to the point book is as good as, if not better than, any of those five. He introduces the subject in a clear and no nonsense way and includes a lot of background information essential to understanding how energy works and why we are about to face a crisis. For readers who are expert on the physics and technology of heat engines and entropy, this book will be a little too basic in part. But even for such experts, Goodstein is essential reading because not only does he understand the science of the energy crisis, he understands the politics. Especially edifying is the material in the Postscript.

Let me reference a few ideas: OPEC (a cartel, as Goodstein explains, patterned after the Texas Railroad Commission which was the cartel that controlled oil production in the US before our supply peaked) likes to maintain prices within a range, "partly in order not to discourage demand for oil, but also to prevent investment in alternative fuels." This we know, of course. But Goodstein adds, "The implied threat is, if you invest money to develop a competitor to oil, we will flood the market with cheap oil and wipe out your investment." (pp. 126-127) This explains in part why we have been so slow to develop alternative sources. Investors are afraid. However, as Goodstein explains, if OPEC no longer has "excess pumping capacity" to flood the market, theirs becomes an empty threat.

Notice another point here: not only are OPEC countries tempted to overstate capacity so that by OPEC rules they are allowed to pump more oil, they are induced to lie about their reserves to scare potential investors away from alternative energy sources. In fact the entire oil industry itself "has a very strong incentive to deny any looming shortage of oil." In other words, to overstate their reserves. Another reason they overstate their reserves "is to keep down the price of oil properties they would like to acquire." (p. 127) Goodstein also explains why "reserves to production" (R/P) numbers have stayed about the same for many decades and why many experts say we still have forty years of oil left, same as we have had for most of the twentieth century.

Quite simply "proven" reserves are reported as "whatever fits the current needs" of the company. (p. 128) It used to be the case that under-reporting was good since it kept the price of oil from plummeting. Now the real danger is to acknowledge that a company doesn't have much oil left. This will cause their stock price to plunge, which is what happened to the Royal Dutch Shell Group "when it was forced by outside auditors to reduce its claims of proven reserves..." (p. 129)

Goodstein's take on the various alternatives to oil, including coal, shale oil, nuclear energy, renewables, etc. is very much in concert with the opinions of other experts. We will be using more coal, dirty as it is, and more nuclear energy, and natural gas. These are the three main alternatives. Not long after we run out of oil we will run out of natural gas and then coal and then even nuclear power plants will grow cold for lack of uranium, which if used to supply energy at the current rate of consumption will be depleted in five to twenty-five years. (p. 106)

Goodstein explores wind and solar and makes it clear that in the long run--if we and civilization are going to make it to the long run--we will have to develop the technology to exploit these renewable sources. This will require a huge investment. We will need the political leadership and will to make the kind of commitment that President Kennedy made in putting a man on the moon.

Goodstein believes that solving the energy problem will require the same sort of formidable and creative technology as did the space program. He adds that "Unfortunately, our present national and international leadership is reluctant even to acknowledge that there is a problem." (p. 123) It is essential that we make the commitment to develop alternatives fuels and we make that commitment NOW because (1) we will need the oil we have left to make the thousands of petrochemical products we will continue to use; (2) we need to free ourselves from dependence on the oil producing countries; and (3) there is an outside danger that the continued burning of fossils fuels will trigger a runaway greenhouse catastrophe that could lead to sterilizing the earth as has happened on Venus.

Note well this horrific downside--far worse than any "nuclear winter"--and note too we could go past the point of no return without even realizing it, and be left with no way to stop the meltdown. Bottom line: "The challenge is enormous but the stakes are even larger. If future generations are to thrive, we who have consumed Earth's legacy of cheap oil must now provide for a world without it." (p. 131)
Posted by Peter at 9:35 AM