Volcanoes I Have Known: Some Pictures

Here are some old photos of two major volcanoes in southeastern Iran. I had the good fortune of making it to the tops of both of them.
Peter 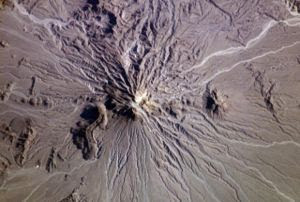 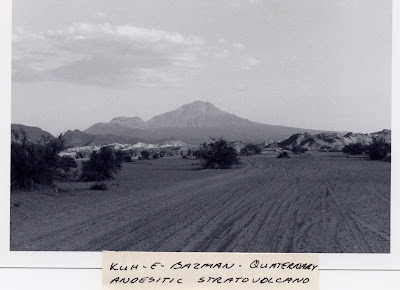 This is the volcano known in Persian (Farsi) as Kuh-e-Bazman, (Mountain of Bazman), the photo is from the north, looking south.

Bazman (Persian: بزمان, also known as Kuh-e Bazman) is a stratovolcano in a remote desert region of Sistan and Baluchestan Province in southeastern Iran. A 500-m-wide crater caps the summit of the dominantly andesitic volcano. Although no historic eruptions have been reported from Bazman, it does contain fumaroles. Its satellite cones have been the source of basaltic lava flows. (From Wikipedia) 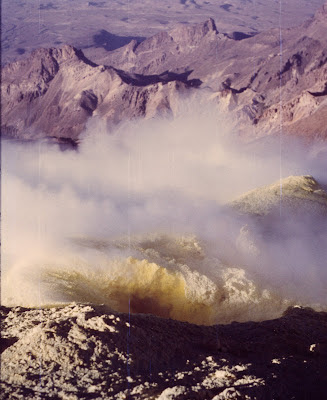 This is a photo of a fumarole venting gas on top of Kuh-e-Taftan in eastern Iran, near the border with Afghanistan and Pakistan. The yellow rock is sulphur being deposited from the escaping gases.


A fumarole (Latin fumus, smoke) is an opening in Earth's (or any other astronomical body's) crust, often in the neighborhood of volcanoes, which emits steam and gases such as carbon dioxide, sulfur dioxide, hydrochloric acid, and hydrogen sulfide. The name solfatara, from the Italian solfo, sulfur (via the Sicilian dialect), is given to fumaroles that emit sulfurous gases.
Fumaroles may occur along tiny cracks or long fissures, in chaotic clusters or fields, and on the surfaces of lava flows and thick deposits of pyroclastic flows. A fumarole field is an area of thermal springs and gas vents where magma or hot igneous rocks at shallow depth are releasing gasses or interacting with groundwater. From the perspective of groundwater, fumaroles could be described as a hot spring that boils off all its water before the water reaches the surface.
A good example of fumarole activity on Earth is the famous Valley of Ten Thousand Smokes, which was formed during the 1912 eruption of Novarupta in Alaska. Initially, there were thousands of fumaroles in the cooling ash from the eruption, but over time most of them have become extinct. Fumaroles may persist for decades or centuries if they are above a persistent heat source, or disappear within weeks to months if they occur atop a fresh volcanic deposit that quickly cools. There are also an estimated four thousand fumaroles within the boundaries of Yellowstone National Park. 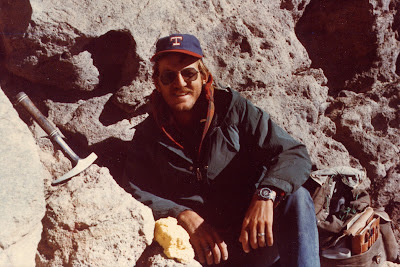 This is a photo of me on the top of Kuh-e-Taftan with a piece of the sulphur visible next to my hand.
Taftan (in Persian: تفتان Taftân) is an eroded stratovolcano in southeastern Iran situated in the Sistan and Baluchestan province. At nearly 4,000 meters (13,000 ft) above sea level, it is the highest mountain in southeastern Iran. The nearest city is Khash. Taftan is a Persian word which means "The Place of Heat".
This is an inactive volcano, however sulphurous gases are emitted from fumaroles at its summit. The peak is usually ascended from west side where a well-equipped shelter has been built. There are very strong winds on this mountain. It is difficult to climb it during winters because of extreme cold and the winds which also cause the snow covering the peak to become frozen and very hard. (from Wikipedia)
A stratovolcano, also called a composite volcano, is a tall, conical volcano composed of many layers of hardened lava, tephra, and volcanic ash. These volcanoes are characterized by a steep profile and periodic, explosive eruptions. The lava that flows from them is viscous, and cools and hardens before spreading very far. The source magma of this rock is classified as acidic, or high in silica to intermediate (rhyolite, dacite, or andesite). This is in contrast to less viscous basic magma that forms shield volcanoes (such as Mauna Loa in Hawaii), which have a wide base and more gently sloping profile.
Although stratovolcanoes are sometimes called composite volcanoes, volcanologists prefer to use the term stratovolcano to distinguish among volcanoes because all volcanoes of any size have a composite (layered) structure — that is, are built up from sequential outpourings of eruptive materials.

I'm planning a trip to Persian Balutchistan and would be interested to get in contact with you about your trip Kuh e Taftan and Kuh e Bazman. Please e-mail me at karl.gratzl@gmail.com. Thanks.