The Snows of Kilimanjaro Fading Away Due To Solar Radiation

Another report and observation from one of my science experts. 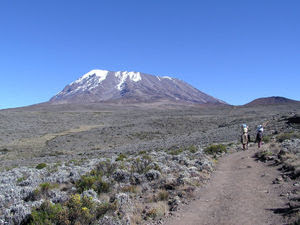 Kilimanjaro, formerly Kaiser-Wilhelm-Spitze, is an inactive stratovolcano in north-eastern Tanzania. Although it does not have the highest elevation, Kilimanjaro is the tallest free-standing mountain rise[1] in the world,[2] rising 4,600 metres (15,000 ft) from its base, and includes the highest peak in Africa at 5,895 metres (19,340 ft), providing a dramatic view from the surrounding plains.
Peter,

Another for your pot.

If solar radiation, then Kilimanjaro is in the same class as Mars, which is currently losing its southern polar icecap, evidently also by solar radiation. An indigestible coincidence if one supposes this has nothing to do with earth's global warming.

By the way, our winter ice in Korea also ablated rather than melted. In our 5 years there I don't recall the ice ever melting away. It just faded away. Like MacArthur. The cold dry Siberians always got there first.

8888888888888888888888888888888888888888
Thursday, June 14, 2007 9:48 a.m. EDT
Kilimanjaro Ice Melt Due to Radiation, Not Global Warming
The snows of Mount Kilimanjaro in Tanzania have been diminishing for more than a century but probably not due to global warming, researchers report.
While the retreat of glaciers and mountaintop ice in the mid-latitudes - where much of the world's human population lives - is definitely linked to global climate change, the same cannot be said of Kilimanjaro, the researchers wrote in the July-August edition of American Scientist magazine.

Kilimanjaro's icy top, which provided the title for an iconic short story by Ernest Hemingway, has been waning for more than a century, according to Philip Mote of the University of Washington in the United States and Georg Kaser of the University of Innsbruck in Austria.
Most of the retreat occurred before 1953, nearly two decades before any conclusive evidence of atmospheric warming was available, they wrote.

"It is certainly possible that the icecap has come and gone many times over hundreds of thousands of years," Mote, a climatologist, said in a statement.
"But for temperate glaciers, there is ample evidence that they are shrinking, in part because of warming from greenhouse gases."
Unlike mid-latitude glaciers, which are warmed and melted by surrounding air in the summer, the disappearance of Kilimanjaro's ice is driven by solar radiation, since the air around it is rarely above freezing, they wrote.

Kilimanjaro, an extinct volcano near Tanzania's border with Kenya, is the highest peak in Africa at 19,563 feet (5,963 metres) and attracts hordes of tourists and climbers for its spectacular views.
The researchers attributed the ice decline to complex interacting factors, including the vertical shape of the ice's edge, which allows it to shrink but not expand.
Decreased snowfall, which reduces ice buildup and determines how much energy the ice absorbs, also plays a role.
Much of Kilimanjaro's ice is vanishing by sublimation - where ice at very low temperatures converts straight to water vapor without going through a watery phase - rather than by melting, the scientists said.

Fluctuating weather patterns related to the Indian Ocean also could affect the shifting balance between the ice's increase, which might have occurred for decades before the first explorers reached Kilimanjaro's summit in 1889, and the shrinking that has been going on since.
© Reuters 2007.
Posted by Peter at 10:12 AM