Stopping Global Warming a Matter of Will, Call It "Triumph of the Will"....Sound Familiar?

Just some thoughts while reading this article from: http://environment.newscientist.com/channel/earth/climate-change/dn11658

First, an excerpt of the article at the bottom of this post. The author is explaining how controlling carbon dioxide emissions and thus global warming is a political issue. Now read his last sentence, "and in politics, most things can be done if there is the will."

Now read this about an infamous movie titled "Triumph of the Will", and see if it doesn't remind you a lot of a movie titled "An Inconvenient Truth". The similarities are chilling, globally chilling.
Peter 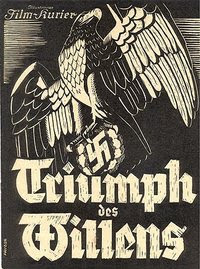 Triumph of the Will (German: Triumph des Willens) is a propaganda film by the German filmmaker Leni Riefenstahl. It chronicles the 1934 Nazi Party Congress in Nuremberg. The film contains excerpts from speeches given by various Nazi leaders at the Congress, including portions of speeches by Adolf Hitler, interspersed with footage of massed party members. Hitler commissioned the film and served as an unofficial executive producer; his name appears in the opening credits. The overriding theme of the film is the return of Germany as a great power, with Hitler as the True German Leader who will bring glory to the nation.

Triumph of the Will was released in 1935 and rapidly became one of the better-known examples of propaganda in film history. Riefenstahl's techniques, such as moving cameras, the use of telephoto lenses to create a distorted perspective, aerial photography, and revolutionary approach to the use of music and cinematography, have earned Triumph recognition as one of the greatest propaganda films in history. Riefenstahl won several awards, not only in Germany but also in the United States, France, Sweden, and other countries. The film was popular in the Third Reich[1] and elsewhere, and has continued to influence movies, documentaries, and commercials to this day, even as it raises the question over the dividing line between art and morality.[2]

............"But this is primarily a political issue. The industrialised nations have already emitted enough carbon dioxide to trigger significant warming. Humanity cannot afford for the developing world to take the same path. So a deal has to be done to prevent that. But today the technology to develop on a low-carbon path is much further advanced. And costs are coming down fast.
A new deal to save the world from climate change will probably involve large flows of technology and cash to the developing world. There are precedents for this. Developing countries are already being paid in cash and technology for not using ozone-destroying chemicals in refrigerators and air-conditioning systems. The same must be done on a bigger scale to halt climate change.
To repeat, this is not primarily a technological or even an economic problem, as huge as these challenges are. It is a political problem. And in politics, most things can be done if there is the will."
Posted by Peter at 1:56 AM

Email ThisBlogThis!Share to TwitterShare to FacebookShare to Pinterest
Labels: An Inconvenient Truth, global warming, Triumph of the Will

Just to let you know I think your spot on with your comparison of Triumph of the Will with Inconvenient Truth!