These diagrams show, and the text explains how the Earth's atmosphere reacts to the energy (light) it receives from the sun. Some this energy is initially absorbed, some reflected, and most is transmitted, that is it passes through the atmosphere, strikes the Earth's surface and is converted to heat. That is what you feel when you sit out in the sun.

The energy that reaches the Earth's surface, that which we feel, is converted to heat energy, (infrared radiation) which then escapes upward and out from the Earth. If this heat did not escape, we would soon all cook to death from the accumulated heat of the sun.

However, not all of this heat escapes. Some of it is trapped within the atmosphere by molecules of gas, called "greenhouse gases". Most notably, these are water vapor, (H2O), methane (CH4) and carbon dioxide (CO2). Interestingly, if all the heat escaped, we would soon freeze to death. So we need the atmosphere to retain some of the heat, not all of it, just a nice comfortable amount. We humans are rather fragile in that regard. Too much heat is bad, too little is bad. So the Earth has somehow worked out a nice balance. More accurately, humans have evolved and adapted to the way things are.

So what is the big deal about global warming? What are humans supposedly doing to upset this nice comfortable balance of energy in....energy out. Well, for the last 150 years, or so, we have been burning coal, for heat, power, and now mostly to generate electricity; and then since about 1920, mainly because of automobiles, we have been burning an ever-increasing amount of oil. By doing this we have been adding a lot of carbon dioxide to the atmosphere. Let's look at the dynamics of where carbon dioxide fits into the picture and try to understand it's importance.
Peter 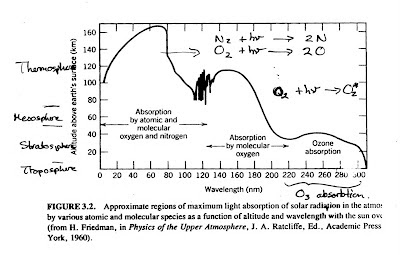 Figure 3 shows where high energy radiation is absorbed in the upper atmosphere (see H.Friedmann, 1960) and the processes that are important in each layer of the upper atmosphere. Molecular and atomic nitrogen and oxygen in the thermosphere and mesosphere absorb the highest energy photons from the sun, either breaking apart into their atomic constituents or forming electronically excited states. Lower in the atmosphere ozone reactions play a role in the absorbtion of photons with wavelengths between 220 nm and 300 nm. The absorbtion of these high energy photons is critical to the existance of higher life forms on Earth since energy in the ultraviolet region of the electromagnetic spectrum can damage DNA.


Energy (E) to heat the Earth comes from incident radiation from the sun. E is inversely proportional to the wavelength of light so more energetic waves are found at shorter wavelengths. In Figure 4, h is Plank's constant and c is the speed of light. Scanning from left to right on the electromagnetic spectrum shown in Figure 4, we move from higher energy (shorter wavelength) for ultraviolet radiation (UV) to lower energy (longer wavelength) for infrared radiation.
The sun's energy is mainly in the visible region with a small amount from the UV and infrared (IR) regions (Figure 5). Energy from the sun is absorbed by the Earth and reradiated back to space as IR radiation. Figure 5 shows the distribution of energy given off by the sun assuming it is a blackbody radiator: a blackbody radiator is one that absorbs and re-emits radiation perfectly. The majority of energy is within the visible region. In contrast the distribution of energy given off by the Earth, again assuming it is a blackbody radiator, is shown for comparison. Note that without an atmosphere, the Earth's surface would be -23 ºC rather than the average +15 ºC it is currently. Part b of Figure 5 shows the absorbance of energy by the atmosphere. Note the "atmospheric window" which allows visible light to reach the Earth's surface. Figure 3 shows how the ultraviolet radiation less than 300 nm is absorbed. At longer wavelengths other molecules are important for energy absorbtion. This is particularly important in the IR region, where the Earth reradiates energy.

Figure 6
Energy reradiated from the Earth is not absorbed uniformly in the atmosphere. Certain molecules play a larger role than others. In first year chemistry, the quantization of the energy levels for a hydrogen atom were described. Only energies having a specific wavelength could be absorbed or emitted in moving an electron to different energy levels. Quantization of energy also is important when looking at the change in molecular vibrational and rotational energies. Atmospheric heating can take place by the absorbtion of infrared radiation. Figure 6 shows the vibrational potential energy curve for an oxygen molecule that has an average interatomic distance of ro. If the atoms were joined by a spring, the potential well would be symmetrical, as for a simple harmonic oscillator. However, an electrical bond can be considered to be like a very weak spring that breaks easily if enough energy is added. The energy needed to break the interatomic bond is the dissociation energy. O2 dissociation does occur in the Mesosphere and Thermosphere where high energy photons from the sun get absorbed. If some energy is added, but not enough to break the interatomic bond, then the molecular vibrational potential increases discretely, rather than uniformly. This reflects the quantum nature of the vibrational potential energy for a molecule. A similar quantization occurs for rotational energy. Different compounds absorb energy in different quantum steps. Since energy is related to wavelength the absorbtion spectrum for specific compounds is unique.


Water vapour and carbon dioxide molecules are common in the atmosphere, and their vibrational and rotational absorbtion bands overlap strongly with outgoing infrared radiation from the earth, so they affect the global radiation budget. Water vapour absorbs in both the infrared and and at higher energy. Below is a diagram showing how energy from the sun is absorbed by molecules in the atmosphere at specific wavelengths. 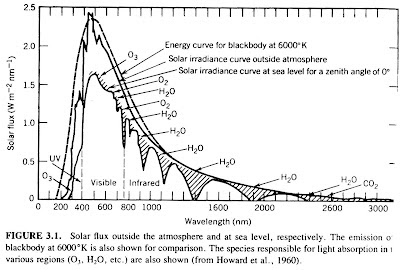 Figure 8
The annual incoming radiation from the sun, averaged over the Earth's surface, is 343 W/m2. The majority of this radiation is in the visible region of the EM spectrum. 103 W/m2 of the incoming radiation is scattered back to space by the atmosphere (89 W/m2) and the surface of the Earth (14 W/m2). These two terms determine the albedo of the Earth. Albedo is the ratio of the reflected radiation to incoming radiation. The albedo of a highly reflecting surface is close to 1. Fresh snow can have an albedo of 0.9 for example. Radiation coming in from the sun that is not scattered back to space is absorbed by the Earth and atmosphere.
The Earth and atmosphere then re-radiate 240 W/m2 in the infrared region of the EM spectrum.

The figure below shows the balance of radiation emitted from the Earth and the atmosphere. The balance between incoming and outgoing radiation is what determines the average temperature of the Earth.

Figure10
The net incoming radiation per unit area at the equator is much greater than at higher latitudes (look at the difference in the surface area on the diagram above). Warm, moist air at low latitudes rises and as it rises its temperature decreases. Water vapour condenses releasing latent heat which drives the air higher. At the same time as the air is rising the temperature difference between the equator and the poles drives the air poleward, setting up the Hadley cell circulation patterns. Warm dry air descends around 30 degrees latitude and recirculates toward the equator. These winds are called the Trade Winds.
The same circulation pattern is seen above 60 degrees latitude but the air is less moist than at the equator so the Hadley circulation cells do not extend as high above the surface closer to the poles (not shown in Figure 3). Between 30 and 60 degrees, the Hadley cell experiences a twisting effect that produces the jet stream. On figure above the jet stream travels into the page at the upper right and out of the page on the upper left. The location of the jet stream is one of the key factors affecting climate at mid-latitudes and is known to shift northward over North America during El Nino events and southward during La Nina oscillations.
Posted by Peter at 1:15 AM