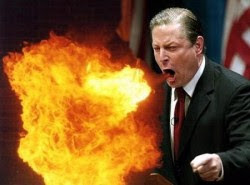 "All those scientists who supposedly have joined the big global warming parade have consistently failed to explain away the illogic upon which their entire campaign rests. We may not all be scientists, but we're not chopped liver either. We can understand something if it is properly explained to us. But all those global warming people keep telling us is that we should "just believe, we wouldn't steer you wrong."

GeoPete
Message #134 - 06/01/07 05:07 PM
LtDan,
Good point.....the belief that man is causing global warming is akin to what is heard in Church. We are told to believe, and have faith. That's fine, in Church. It is almost funny, but the global warmers use the same tactics as preachers, and they even sound like them! Preachers of fire and brimstone! I have a picture here for you.

But religion doesn't stand up very well in court, at least not in the free world. I imagine most judges would rather frown at the defendant who says, "I killed him because god told me to." That kind of defense didn't work at Nuremburg and it won't work now with those trying to defend anthropogenic (man-caused) global warming. Logic, and hopefully the law, will not allow it.