Measuring Solar Activity As It Relates To Climate Change 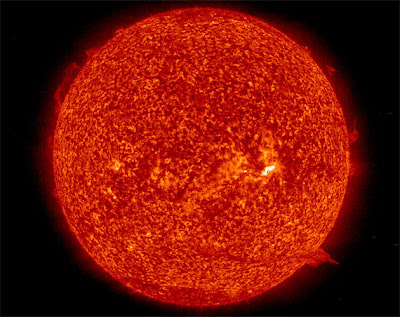 With a debate over implications on climate change at stake, solar researchers in Canada have been finding new lows in magnetic field outputs from the sun, captured here in an image from NASA's Solar and Heliospheric Observatory.
Sun Stays Sluggish as Weathermen Fight for Anti-Ice Age Funding
By Joe Pappalardo
Published on: February 6, 2008
source:
Every day, scientists hoping to see an increase in solar activity train their instruments at the sun as it crosses the sky. This is no idle academic pursuit: A lull in solar action could potentially drive the planet’s temperature down, or even prompt a mini Ice Age.
For millennia, thermonuclear forces inside the star have followed a regular rhythm, causing its magnetic field to peak and ebb, on average, every 11 years. Space weathermen are watching for telltale increases in sunspots, which would signal the start of a new cycle, predicted to have started last March and expected to peak in 2012. “When the sun’s active, it’s a little bit brighter,” explains Ken Tapping, a solar researcher and project director for Canada’s National Research Council.
So far, Tapping reports no change in the magnetic field strength, as measured by radio telescopes. On the more positive side, last month NASA reported a small, earth-sized sunspot with a magnetic field pointing in the opposite direction from those in the previous cycle; qualities that designate the spot as a signal of a new upturn in activity. At the solar maximum, scientists expect to see between 75 and 150 such sunspots per day.
Tapping oversees the operation of a 60-year-old radio telescope that he calls a “stethoscope for the sun.” Recent magnetic field readings are as low as he’s ever seen, he says, and he’s worked with the instrument for more than 25 years. If the sun remains this quiet for another a year or two, it may indicate the star has entered a downturn that, if history is any precedent, could trigger a planetary cold spell that could bring massive snowfall and severe weather to the Northern Hemisphere.
The last such solar funk corresponded with a period of bitter cold that began around 1650 and lasted, with intermittent spikes of warming, until 1715. While there were competing causes for the climatic shift—including the Black Death’s depopulation of tree-cutting Europeans and, more substantially, increased volcanic activity spewing ash into the atmosphere—the sun’s lethargy likely had something to do with it.
Just how much influence the sun has on global temperatures has been the subject of sometimes acrimonious debate. While an upswing in solar activity may cause a warming trend, it was discounted in the mid-1990s as the sole driver of current climate change. And for anyone hoping that a solar downswing might bail us out of our current dilemma: Solar influence on climate is slight compared to the impact of man-made greenhouse gases, a National Academy of Sciences report concluded in 1995.
The planet’s climate is a messy picture, with all sorts of influences and feedback cycles that need to be taken into account. In order to build more accurate computer models, scientists need to understand both anthropogenic factors and the link between the sun and our planet, Tapping says. To help get at the sun’s influence, he and other researchers connect Earth’s temperature with historic sunspot records of sky watchers from Europe and China, as well as with carbon-14 isotopes­—residue from cosmic rays delivered by the sun’s magnetic field—found in tree rings. To understand our role in climate change,” he says, “we need to understand the natural process.” 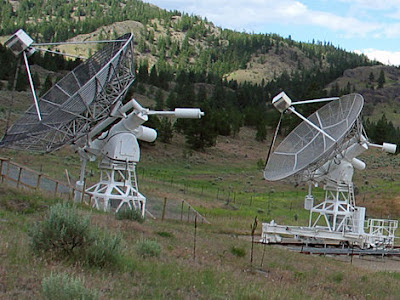 An array of of solar radio telescopes measure the sun's strength, but opportunities for funding have been few and far between lately.

In Canada, where radio-telescopic monitoring of the sun has been conducted since the end of World War II, a new instrument, the next-generation solar flux monitor, could measure the sun’s emissions more rapidly. It would also provide details about the sun’s emissions by examining signals at more wavelengths than the current instrument. Canada’s space agency coordinates activity with England and the U.S., sharing data and constructing complementary telescopes. Researchers were hoping the new radio telescope would get the green light as early as last week, but are now saying that budget cuts from other countries may delay or even jeopardize the program.

“Things are all on hold due to the consequences of the huge science funding cuts in the U.S. and the U.K.,” Tapping says. “This is impacting other partner countries because of the possible need to cover financial holes. Nobody is clear yet as to how this will unfold so they are hanging onto their wallets, for the moment.”

The new Canadian telescope is an independent project but has been designed to work closely with a proposed array of 100 telescopes in the United States. Collectively called the Frequency Agile Solar Radiotelescope (FASR), the array will directly measure coronal magnetic field strengths. The system will also show the locations of electrons accelerated by solar flares and will provide images of coronal mass ejections. Assuming, of course, it is funded.

“Given fiscal realities, it has been slow in moving forward,” says Tim Bastian, principal investigator of the FASR team, which represents a consortium of American universities. “However, we recently submitted our preliminary proposal for construction to the National Science Foundation and expect to submit the full proposal in June. If all goes according to plan, the five-year construction project will be funded at the end of this fiscal year.” In which case, the first monitoring systems will be coming online in three years, giving us much-needed insight into the state of our local star.
Posted by Peter at 11:08 PM