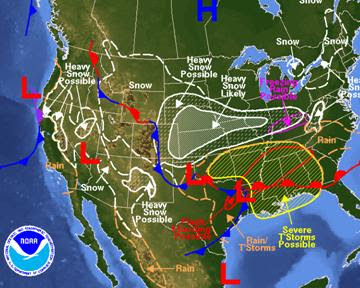 The first day of spring arrived with an unusual blast of winter, an event some are attributing to global warming.

Washington, D.C.) The first day of spring arrived today with widespread cold and snow, an event that some say is just one more sign of global warming. "This is exactly in line with what we have been predicting for years," explained James Fearmonger, chief climate scientist at the newly formed Global Warming Prediction Center. "With global warming we have predicted that some areas will see more precipitation, some less precipitation, some will experience warmer weather, some colder. So this event can be fully explained by global warming".

The unusual weather event has also kept fearcasters at the National Weather Service unusually busy when it was discovered that there were not enough colored pens to draw all of the features on today's weather map (see accompanying graphic). "We were scrambling to find all of our pens…someone is always borrowing them, and today we needed every dang color!", exclaimed an obviously frustrated forecaster, who only spoke to ecoEnquirer on condition of anonymity.

With winter storm warnings extending from the Great Plains into the Ohio Valley, a few government insiders are predicting that a new congressional inquiry into the unusual storm will be started later this week. "There has been a lot of finger pointing this morning," explained one FEMA official. "This storm surprised everyone. Local, state, and federal disaster officials were all caught with their pants down on this one…it's not a pretty sight."