Stop The Presses......What We Have Now Is Global Cooling

Call it what you will, global cooling, or "The Al Gore Effect". No you can not have your money back on all those carbon credits you just bought. What about all these efforts to stop global warming, the UN's IPCC, the Kyoto Treaty, what are we going to do?
Peter 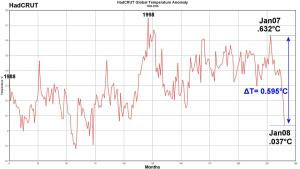 World Temperatures according to the Hadley Center for Climate Prediction. Note the steep drop over the last year.

Twelve-month long drop in world temperatures wipes out a century of warmingOver the past year, anecdotal evidence for a cooling planet has exploded. China has its coldest winter in 100 years. Baghdad sees its first snow in all recorded history. North America has the most snowcover in 50 years, with places like Wisconsin the highest since record-keeping began. Record levels of Antarctic sea ice, record cold in Minnesota, Texas, Florida, Mexico, Australia, Iran, Greece, South Africa, Greenland, Argentina, Chile -- the list goes on and on.
No more than anecdotal evidence, to be sure. But now, that evidence has been supplanted by hard scientific fact. All four major global temperature tracking outlets (Hadley, NASA's GISS, UAH, RSS) have released updated data. All show that over the past year, global temperatures have dropped precipitously.

A compiled list of all the sources can be seen here. The total amount of cooling ranges from 0.65C up to 0.75C -- a value large enough to wipe out nearly all the warming recorded over the past 100 years. All in one year's time. For all four sources, it's the single fastest temperature change ever recorded, either up or down.

Scientists quoted in a past DailyTech article link the cooling to reduced solar activity which they claim is a much larger driver of climate change than man-made greenhouse gases. The dramatic cooling seen in just 12 months time seems to bear that out. While the data doesn't itself disprove that carbon dioxide is acting to warm the planet, it does demonstrate clearly that more powerful factors are now cooling it.

Let's hope those factors stop fast. Cold is more damaging than heat. The mean temperature of the planet is about 54 degrees. Humans -- and most of the crops and animals we depend on -- prefer a temperature closer to 70.

Historically, the warm periods such as the Medieval Climate Optimum were beneficial for civilization. Corresponding cooling events such as the Little Ice Age, though, were uniformly bad news.
(source:)
Posted by Peter at 2:49 PM