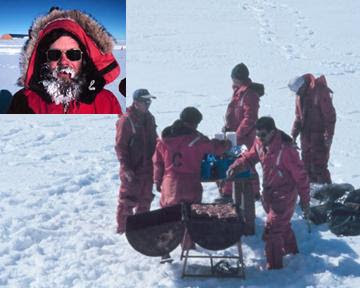 Each summer, Americans enjoy traditional activities such as swimming, camping, and going to the beach. While some of these events are limited to areas with the warmest temperatures, global warming is increasingly allowing summer fun-seekers even in the far north to enjoy them as well. In Barrow, Alaska, the summers are usually dismal, cold, and above all, short. Ice perpetually coats the Arctic Ocean, placing this coastal town at the edge of a endless blanket of white. But as summertime temperatures continue to soar in response to global warming (which is now known by all reputable scientists to be man-made) more summer activities are being enjoyed by the locals.

At a recent summer solstice party, residents of this traditionally frigid town were seen enjoying an outdoor barbecue. Many were able to go without gloves, which years ago would have been an open invitation to frostbite. "I love it", said local Lars Larsen, wiping frost from his full beard. "This is the warmest summer I can ever remember…even the polar bears are looking for a shady spot to escape the heat."

As party goers traded stories about the warm weather, children were seen frolicking in the melting snow. Parents dutifully applied sunscreen to their children's faces, which would normally be covered by insulated masks. One resident was overheard telling the others around him that he had actually turned off the heat in his house for several hours on a recent warm day. Others accused him of exaggerating. "That's Wild Bill for ya", noted one woman. "He always has a wild story to tell."

There has been endless speculation about how long the warming will last. Some in Barrow believe that one day their children or grandchildren will be able to walk to school without a coat. Others were seen passing around pictures that showed what the ocean looks like when it isn't covered by ice. "Sure is pretty", one man observed. "Kind of a blue color." Still, the inevitable return of winter brings them back to reality. "We'll soon be back inside, hiding from the cold, heating our car engines so they will start the next morning, and treating frostbite in our children when they have stayed too long outside after school". "But next summer," Wild Bill exclaimed loudly, "I'm gonna go outside with just a sweater on!" The others just laughed, "That's Wild Bill for ya…"