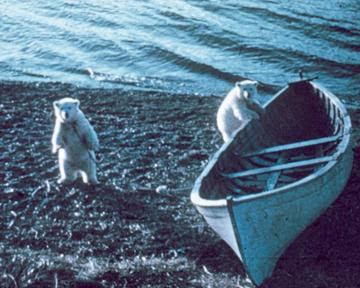 Here in the polar bear capitol of the world, living with polar bears is never boring. In late summer everyone is on edge as hundreds of polar bears come into town after the sea ice melts on Hudson Bay. Because the bears are so dangerous to humans, people leave their doors unlocked in case someone gets chased by a bear, and children are not allowed to walk to school alone. Contrast this fearsome reputation of the adult polar bear, weighing up to 1,500 pounds and possibly the most dangerous carnivore on Earth, with cuddly-looking polar bear cubs and one might wonder, "when do the bears go 'bad'? What causes these innocent cubs to grow up to be so vicious?"

The answer to this mystery might be found in another mystery that has plagued Churchill for years. Even though everyone knows each other in this sleepy little town, there have been an unusual number of thefts. Cars, boats, and even garbage cans have been taken. But the stolen items always seem to turn up again. For instance, cars and trucks usually have been driven to the edge of Hudson Bay, and then left there with their motors running and with the doors open. Boats are taken, but they usually end up being found pulled up upon an ice floe out in the bay. Garbage is actually stolen out of the cans. The thefts have pitted neighbor against neighbor, and have made the residents of Churchill suspicious of everyone.

But then a group of townspeople decided to install a few security cameras to try to catch the culprit. The plan paid off when two bear cubs were caught stealing a boat (see picture above). "It appears that the young cubs simply have too much time on their paws, and without close parental supervision, they go out in search of thrills", explained Manitoba Provincial Police officer Ursula Merrytime. "When the cubs are left unsupervised, anything can happen." Instead of walking the distance between town and the bay, the bear cubs steal rides in boats, cars and trucks. Since most people do not lock their vehicles, and keys are often left in the ignition, they are easy targets for roving gangs of juvenile bear thugs. When the cubs get hungry, rather than chase seals, they simply steal the nearest garbage can along with its tasty contents. Now that the mystery is solved, the residents of Churchill have a new problem: how to keep the cubs from continuing with their troublemaking.

Talking with the cubs' parents has gotten nowhere since the parents respond very defensively, even aggressively. The local bear jail, used for the most troublesome adult bears, could possibly be used for confining cubs as well, by many residents are offended by cute bear cubs being locked up in the slammer. A Bear Youth Center has also been discussed as a way to offer more wholesome activities to the cubs to occupy their idle time. "But something has to be done", said Officer Merrytime, "I just can't bear many more of these thefts…I'm already covered up in paperwork as it is."