EPA Seeks To Have Water Vapor Classified As A Pollutant

EPA Seeks To Have Water Vapor Classified As A Pollutant 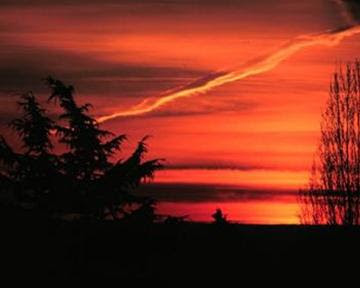 This jet condensation trail seen at sunset will gradually evaporate, increasing the water vapor content of the atmosphere. Since a wide variety of human activities produce water vapor, the Earth's main greenhouse gas, the Environmental Protection Agency is seeking to have it designated as a pollutant.

(Washington, DC) The Environmental Protection Agency is seeking to classify water vapor as a pollutant, due to its central role in global warming. Because water vapor is the dominant greenhouse gas in the atmosphere, accounting for at least 90% of the Earth's natural greenhouse effect, its emission during many human activities, such as the burning of fuels, is coming under increasing scrutiny by federal regulators.

Until now, the carbon dioxide produced during the burning of fuels has been the main concern. The extra carbon dioxide causes a manmade enhancement of the greenhouse effect. But water vapor is also produced by combustion of most fuels, as well as by industry and utilities that use water for cooling. The EPA would be able to regulate its manmade sources if it is classified as a pollutant. EPA Director of the Department of Pollutant Decrees, Ray Donaldson, said, "Back before carbon dioxide was dangerous, we simply assumed that water vapor was also benign. But all reputable scientists now agree that the increased water vapor content of the atmosphere from such sources as burning of fuels and power plant cooling towers will also enhance the greenhouse effect, leading to potentially catastrophic warming."

If successful, the push to classify water vapor as a dangerous pollutant would impact virtually everyone. For instance, homeowners could see a wide variety of common activities that cause evaporation being regulated: watering the lawn, or using a hot tub or swimming pool. "Right now, we are not so concerned about the water vapor exhaled by people. That is low on our list of priorities", said Mr. Donaldson. "We'll tackle that manmade source at a later time." One likely result of such regulation would be an additional tax on fuels used by cars, trucks, passenger jets, and a wide variety of industries and utilities.

Predictably, the Bush Administration has voiced opposition to any regulation of water vapor emissions. White House staffer Lew Moninsky told ecoEnquirer, "This is simply ridiculous. The EPA wants to regulate all human activity out of existence. What about the massive amounts of water vapor being evaporated from the world's oceans every second? That's OK?, but human production of small amounts of vapor isn't? If it weren't for water vapor, there would be no rainfall! Give me a break!" "Well, of course the Administration would say that…", said Mr. Donaldson, "..they're in the pocket of 'big oil' anyway."

The EPA is rumored to have a rather extensive list of potential pollutants in addition to water vapor, and some insiders claim that all known chemical compounds are targeted for future regulation. When informed of the rumored list of chemicals, Mr. Moninsky asked, "Well, since everything is made of chemicals, I guess that means that even every molecule of your body will be subject to regulation as well, doesn't it?"

Asked for their position on the matter, Greenpolice spokesperson Rainbow Treetower stated, "Our basic policy is, if it's good for people, it's bad for the planet."