Obama Tries To Save Face In Copenhagen

..Obama’s short speech to the conference plenary was probably the most insulting and patronising speech delivered by a US President in a long time. Obama poorly understood the mood of the audience and chose to behave like an infallible school master lecturing children about the importance of keeping their socks up to maintain school dignity, rather than appealing to each leader’s hopes to share in collective victory.... 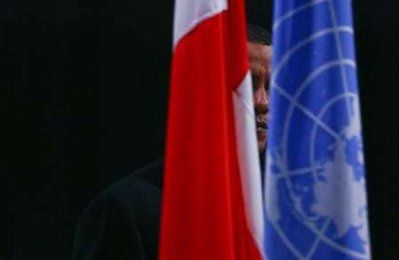 The Bella Centre in Copenhagen looks more like the aftermath of a particularly messy house party rather than the place where 120 of the most powerful men and women have just met to discuss saving the planet. The largest gathering of world leaders in recent history began with hope and excitement as President Barack Obama himself swept into town.

He said America was ready to fight climate change by cutting greenhouse gases as long as other countries also cut their emissions - and crucially agree to being monitored by the outside world.

Umm, actually no we can’t.

It soon became clear that China was not signing up to any treaty that allowed other countries to snoop around in their dirty emissions laundry.

Chinese Premier Wen Jiabao reportedly left for his hotel in a huff and suddenly the whole conference was plunged into chaos.

Despite two weeks of hardcore talks it now seemed like the world could not agree after all – or rather the two main superpowers would not agree.

Negotiations were cancelled and thousands of delegates wandered the corridors looking confused and rather sad.

Meanwhile, somewhere in a posh hotel in town or perhaps in the Bella Centre itself, no one is really sure, President Obama and his counterparts met to try and salvage an agreement.

Copies of the Copenhagen Accord, as it has now become known, began to circulate. But as soon as one was agreed another would emerge – each weaker than the next.

Environmental groups began to panic as any reference to binding targets was removed, then a date for emissions peaking. The need to report emissions was watered down so that countries could do it domestically and then simply tell the world what they are doing. Finally – and most importantly perhaps – a date at which to make the whole thing into a legally-binding treaty was dropped.

Just as it seemed all was lost, it was reported President Obama was giving a press conference. Hundreds of journalists sprinted through the corridors and cafes only to be told it was cancelled and see a fleeting glimpse of the President leaving for the airport.

Twitter alerts were going mad as rumour and counter-rumour flew around the conference centre saying the deal had collapsed, or was imminent, or coming in few hours. Eventually, of course, it was announced by the White House.

The President calmly pronounced that a deal had been done. It was not sufficient to fight climate change and it was not legally binding but it would do, he said.

The 'Copenhagen Accord' was immediately attacked by the French, the Germans and the British but they accepted it and so did the world’s press as deadlines loomed.

However there are 192 countries in the UN process and they all need to sign. Many are angry. They call the “accord”, pushed through by the Americans and barely acknowledged by China – even though they have apparently signed up – a joke.

In the early hours of the morning, as delegates limped out into the snow it was still unclear whether a deal has actually been done.