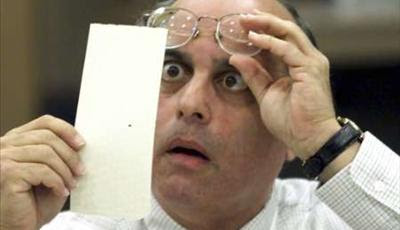 LOOKING A THE PRICE TAG TO STOP GLOBAL WARMING?

Money, that is what the climate meeting in Copenhagen is all about. The scare tactics behind the myth of man-caused global warming are just one of the tools to take (steal, tax) money from those who earn it and distribute it to those who don't. We're all being played for fools by those promoting climate change as human-caused and supposedly controllable by a one-world government. Read the following article and consider how much money is involved in this massive hoax, then you'll understand why some people promote "cap and trade (tax)" legislation.
Peter

In trying to minimize the importance of “ClimateGate,” Al Gore sounds like the Wizard of Oz, "Pay no attention to that man behind the curtain!"

During a CNN interview, Gore downplayed the meaning of the emails at the center of the controversy by saying, “Well, they took a few phrases out of context. These are private e-mails, more than 10 years old, and they've tried to blow it up into something that it's really not."

Like Dorothy’s dog Toto, the posting of emails and documents on the internet from the University of East Anglia’s Climatic Research Unit has pulled back the green curtain on the secret world of leading climate scientists, exposing a disturbing pattern of apparent scientific misconduct.

Most concerning, the scientists involved played a key role in the United Nations’ Intergovernmental Panel on Climate Change (IPCC) – the body responsible for producing the reports on global warming politicians use to justify mammoth interferences in the free market such as the Kyoto Treaty and cap-and-trade legislation.

These disclosures are a serious blow to Gore and to global warming alarmists at the United Nations and elsewhere.

While it’s easy for Gore to dismiss the significance of “ClimateGate” and continue to skip down the yellow brick road, concerns of scientific fraud in global warming research is an inconvenient truth for the CEOs who have banked on cap-and-trade legislation as a business strategy.

“ClimateGate” poses a dilemma for Duke Energy CEO Jim Rogers and Exelon CEO John Rowe, two of the most outspoken supporters of cap-and-trade, because their companies have specifically said they are relying on the IPCC’s conclusion as the scientific basis to call for government-imposed emissions limits.

In testimony before the Senate Committee on Environment and Public Works in October, Exelon’s Rowe said, “We believe that the climate change science is settled …The IPCC has declared that evidence for a discernable warming of the planet’s climate system is now “unequivocal” – and has warned that much larger changes are in store if we don’t begin reducing global emissions of heat-trapping greenhouse gases and do it soon.”

A Duke report on global warming states, "...our policy positions are driven by the IPCC peer-reviewed science and by our judgment that this science is not only credible, but that it is accepted by the vast majority of public policymakers who will shape U.S. climate legislation in the years to come."

Both Rogers and Rowe have taken a very high public profile in calling for cap-and-trade. In addition to testifying in Congress, these CEOs formed a partnership with the Environmental Defense Action Fund (EDAF) to promote cap-and-trade through TV and print advertising campaigns. The ads, paid for by EDAF, can be found at http://www.asmarcap.com/.

Profit is the motivation. In an interview, Rowe said, “We don't flinch from the charge that, yes, some of our motivation and enthusiasm comes from the fact that we should make money on it if it happens.”

With billions at stake, it’s no wonder CEOs would skip over the finer points of global warming research and use conclusions that conveniently generate huge profits while making them appear to be concerned about the state of the planet.

Unlike Gore, however, Rogers and Rowe lead publicly-traded companies with a fiduciary responsibility to shareholders that compels them to act in the best interest of their investors. Such a responsibility includes a requirement that decisions must be based on the best available information that is reasonably discoverable.

Accordingly, Rogers and Rowe, along with other CEOs lobbying for cap-and-trade, should conduct an independent investigation of “ClimatgeGate” to determine its impact on the soundness of the IPCC’s conclusion.

These CEOs must exercise their fiduciary responsibility by carefully assessing whether they have been duped by a group of rogue climate change scientists. Thanks to “ClimateGate,” the burden of proof is now on the CEOs to show their global warming policy is sound.

Until the cloud clears on the IPCC report, companies should immediately cease lobbying for nationwide laws to cap emission limits.

Companies actively seeking emissions limits are clearly at a crossroads. With shareholders’ money at stake, they can ignore the importance of “ClimateGate” or they can exercise prudence and seriously examine the issues raised by this controversy. The billions CEOs hope to make from cap-and-trade could easily disappear if the scientific underpinnings of the IPCC report vanish into thin air.

I'm glad to see someone as brainy as Sarah Palin weighing in on the controversy. I'm sure she reads all the publications and, better still, understands them.

Isn't it wonderful that Sarah Palin has the courage to speak out against the obvious nonsense of man-caused global warming?

Surely she is as entitled to her opinion as is this "anonymous" clown.