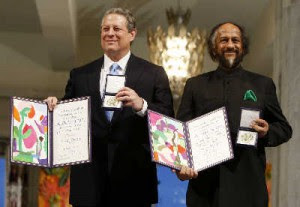 Even the Criminals of Climategate Avoid Gore

“It is better to deserve honors and not have them than to have them and not deserve them.”—Mark Twain.

Twain’s observation is precisely the issue with the Nobel Peace Prizes given to Al Gore and the Intergovernmental Panel on Climate Change (IPCC). The IPCC are now completely discredited because the ‘scientists’ at the Climatic Research Unit (CRU) at the University of East Anglia controlled the data, the computer models and the press releases officially known as the Summary for Policymakers (SPM).

You really need to get over your Gore fixation, Pete.

Anon,
Why?
Al Gore is the world's number one horses a$$. Except maybe for the current president. America and Americans face some serious challenges.....and it begins with the idiots who believe in and support the myth of man-caused global warming.

Gore, for all his hypocrisy and deceit, is a deserving target of scorn and ridicule. And his recent comments regarding the 'climategate' scandal are just more proof of his absurdity.

There's another fitting quotation by Mark Twain, "It is better to keep your mouth closed and let people think you are a fool than to open it and remove all doubt."