Who Are You Calling A "Denier"?

The Label "Denier" Is A Lie

I am not in "denial". I am not part of any "public relations" program. I am not beholden to nor paid by anyone to express my opinion about what I call the myth of man-caused global warming. Oh, and I am an Earth Scientist, a Geologist to be exact. My original interest in this subject has been purely scientific. It is politicians who have made global warming a world-wide political and economic issue. I have all of this well-documented and I've done it purely as a hobby, as ...almost a personal battle against injustice.
It is unjust because most people are not scientists and are too busy with their own lives to look into the real science behind the concept of man-caused global warming. As sure as the sun rises in the east and sets in the west, I am sure man's activities are not significantly involved in causing global warming or climate change. People are and have been systematically, callously, relentlessly, calculatingly indoctrinated into believing that the burning of fossil fuels, (coal and oil) is causing global warming, climate change and every weather-related event, the more dramatic and destructive the better.

And our government just keeps pouring out the false propaganda, and since the government might as well own the mainstream media, theirs is the only side of the story most people hear. It is a travesty and a tragedy. It is being pursued by governments for only one reason: to control the energy industry and use it as a means of further controlling and taxing the people. It is like taxing the food we eat or the air we breathe. When and if people become aware of this, they will become, as I am, outraged.

Read the following typically slanted article and check out my blog linked in the comments section.
http://www.forbes.com/sites/robertwynne/2014/06/26/the-public-relations-debate-about-global-warming-heats-up/

Opening quote from the linked article in Forbes:
"The denial of man-made global warming is one of the greatest PR campaigns in history.  With echoes of the industry-funded research from tobacco companies that denied links between smoking and lung cancer, the well-coordinated PR plan has delayed new regulations for coal and petroleum industries and influenced millions of Americans."
The author of this article is wrong, exaggerated, uneducated, and inflammatory in nearly everything he says.  It is little wonder I don't pay much attention to anything printed in Forbes Magazine.  How can they pay someone to write something so stupid?

Glaciers As Global Warming Drama, Part Of The Big Lie

The nonsense about man-caused global warming and climate change just keeps coming.  It is the grandest hoax of our age, and that is saying a lot.  What is the latest outrage to irk me?  Glaciers.  Plain old ice.

Everyone responds to dramatic effects.  The news media knows that.  Hollywood knows that.  We are a culture bred to respond to video or photographic images.  Man was first influenced by verbal story tellers, then accompanied by song, then came the written word, then the drawn or painted visual word, followed by photographs, then moving photographs, now video and everything digitized and available anywhere at the speed of light.

This is why glaciers are used so often to depict "catastrophic" global warming, because they are visual, huge, dramatic, and awe-inspiring.  Imagine, people take cruises to places like Alaska, Patagonia, Argentina, and Antarctica, for what?  To see big ice cubes (glaciers) melt.  Then they attribute the melting to man's burning of fossil fuels and the emission of carbon dioxide (CO2).  Apparently, many people are so awed by this melting ice they are willing to open their wallets and freely give money to those who promise stop the calamity of big melting ice cubes.  This melting and freezing of glacial ice has always been going on.  It is nothing new.  Al Gore did not invent it.  It is not a catastrophe because President Obama's teleprompter says so, or because John Kerry is instructed to say it is.  It all sounds insane, doesn't it.  Well, it is.

Why do they continue lying to us about global warming and climate change as being (or implied to be) man-caused in articles like the following? The only answer is we are being manipulated. What is the reason? If this effort is based on lies, it is wrong, and our money (taxes) are being taken unfairly and we ought to be outraged. Can it be much simpler than that? Are we so afraid to dissent and disagree that we march along like sheep to the slaughter? Have we as a people, as a nation, sunk so low, become so passive, so obedient? I hope not, even if recent election results seem to indicate otherwise.
Peter 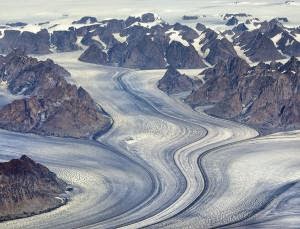 
"THE cracks are beginning to show. Greenland's ice sheets slid into the sea 400,000 years ago, when Earth was only a little warmer than it is today. That could mean we are set for a repeat performance.
The finding, along with data from Antarctica, suggests both of Earth's big ice sheets may have already passed a crucial tipping point, condemning them to collapse – either melting, or sliding into the ocean. That will mean sea levels rising by as much as 13 metres, leading to massive coastal flooding. So how fast will the ice collapse, and can we stop it?"
(Is the above statement from the linked article complete sensationalist nonsense, or what?  Of course it is, and it is typical of what our young people are being fed and considered science.  Think of what a steady diet of this poison does.  And we wonder why people vote the way they do?  Peter)
Posted by Peter at 10:36 PM No comments:

It is well known and documented that Alpine Glaciers (those found in mountainous areas) have advanced and retreated many times in recordable history.  This is history witnessed and written of by man during the past approximate 5,000 years.  There is unmistakable and unarguable evidence these glaciers have advanced and retreated many times since the end of the last Ice Age, when Continental Ice Sheets covered much of the Polar Regions and the Northern Hemisphere.  Something caused this glacial retreat, or melting, and it wasn't man-caused.  At least this melting occurred before he burning of massive amounts of fossil fuels and the emission of carbon dioxide (CO2).

These were also at least as rapid climate changes as we see in the world today.  So what is unique about current events?  Why are we in such a frenzy to "stop climate change"?  It is nothing unusual, unless we're being scared and panicked by fear?  Is it so we will happily, or a least willingly, pay more taxes, carbon taxes or otherwise, to solve this imaginary warming problem?  We should be worried, but not about global warming.
Peter

Tuesday, 17 Jun 2014 07:59 AM
By Larry Bell
Dr. Christian Schlüchter’s discovery of 4,000-year-old chunks of wood at the leading edge of a Swiss glacier was clearly not cheered by many members of the global warming doom-and-gloom science orthodoxy.
This finding indicated that the Alps were pretty nearly glacier-free at that time, disproving accepted theories that they only began retreating after the end of the little ice age in the mid-19th century. As he concluded, the region had once been much warmer than today, with “a wild landscape and wide flowing river.”
Dr. Schlüchter’s report might have been more conveniently dismissed by the entrenched global warming establishment were it not for his distinguished reputation as a giant in the field of geology and paleoclimatology who has authored/coauthored more than 250 papers and is a professor emeritus at the University of Bern in Switzerland.
Then he made himself even more unpopular thanks to a recent interview titled “Our Society is Fundamentally Dishonest” which appeared in the Swiss publication Der Bund where he criticized the U.N.-dominated institutional climate science hierarchy for extreme tunnel vision and political contamination.
Following the ancient forest evidence discovery Schlüchter became a target of scorn. As he observes in the interview, “I wasn’t supposed to find that chunk of wood because I didn’t belong to the close-knit circle of Holocene and climate researchers. My findings thus caught many experts off guard: Now an ‘amateur’ had found something that the [more recent time-focused] Holocene and climate experts should have found.”
Other evidence exists that there is really nothing new about dramatic glacier advances and retreats. In fact the Alps were nearly glacier-free again about 2,000 years ago. Schlüchter points out that “the forest line was much higher than it is today; there were hardly any glaciers. Nowhere in the detailed travel accounts from Roman times are glaciers mentioned.”
Schlüchter criticizes his critics for focusing on a time period which is “indeed too short.” His studies and analyses of a Rhone glacier area reveal that “the rock surface had [previously] been ice-free 5,800 of the last 10,000 years."

Such changes can occur very rapidly. His research team was stunned to find trunks of huge trees near the edge of Mont Miné Glacier which had all died in just a single year. They determined that time to be 8,200 years ago based upon oxygen isotopes in the Greenland ice which showed marked cooling.
Casting serious doubt upon alarmist U.N.-IPCC projections that the Alps will be nearly glacier-free by 2100, Schlüchter poses several challenging questions: “Why did the glaciers retreat in the middle of the 19th century, although the large CO2 increase in the atmosphere came later? Why did the Earth 'tip' in such a short time into a warming phase? Why did glaciers again advance in the 1880s, 1920s, and 1980s? . . . Sooner or later climate science will have to answer the question why the retreat of the glacier at the end of the Little Ice Age around 1850 was so rapid.”
Although we witness ongoing IPCC attempts to blame such developments upon evil fossil-fueled CO2 emissions, that notion fails to answer these questions. Instead, Schlüchter believes that the sun is the principal long-term driver of climate change, with tectonics and volcanoes acting as significant contributors.
Regarding IPCC integrity with strong suspicion, Schlüchter recounts a meeting in England that he was “accidentally” invited to which was led by “someone of the East Anglia Climate Center who had come under fire in the wake of the Climategate e-mails.”
As he describes it: “The leader of the meeting spoke like some kind of Father. He was seated at a table in front of those gathered and he took messages. He commented on them either benevolently or dismissively.”
Schlüchter’s view of the proceeding took a final nosedive towards the end of the discussion. As he noted: “Lastly it was about tips on research funding proposals and where to submit them best. For me it was impressive to see how the leader of the meeting collected and selected information.”
As a number of other prominent climate scientists I know will attest, there’s one broadly recognized universal tip for those seeking government funding. All proposals with any real prospects for success should somehow link climate change with human activities rather than to natural causes. Even better, those human influences should intone dangerous consequences.
Schlüchter warns that the reputation of science is becoming more and more damaged as politics and money gain influence. He concludes, “For me it also gets down to the credibility of science . . . Today many natural scientists are helping hands of politicians, and are no longer scientists who occupy themselves with new knowledge and data. And that worries me.”
Yes. That should worry everyone.
Larry Bell is a professor and endowed professor at the University of Houston, where he directs the Sasakawa International Center for Space Architecture and heads the graduate program in space architecture. He is author of “Climate of Corruption: Politics and Power Behind the Global Warming Hoax,” and his professional aerospace work has been featured on the History Channel and the Discovery Channel-Canada.
see more
Posted by Peter at 9:36 PM No comments: