We have not totally won this war, but we're making progress.  Much depends on our ultimate victory; our economy, jobs, the environment itself, on even the integrity of science.  Unfortunately this whole sordid affair has become all too political and is now one major reason Obama must go.   The following article is excellent.  Share it.
Peter


Al Gore's act is coming to an end. 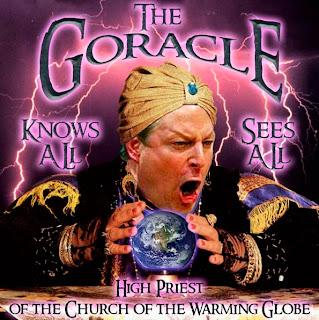 source: http://finance.townhall.com/columnists/maritanoon/2012/05/28/climate_deniers_winning_the_war
“We are winning the war,” was a phrase I heard repeatedly this week. Congressman Sensenbrenner, Vice Chair of the House Committee on Science, Space, and Technology, said: “We won on these issues because we were right.”

Which war? The war that brought together more than 60 scientists from around the world—including astronauts, meteorologists, and physicians; politicians—comprising the Congressman, a head of state, and a member of the European Parliament; and policy analysts and media for two-and-a-half days in Chicago, in a battle over climate change and the belief that there needs to be real science—more “about honest debate than ideological warfare.”

Assembled by the Heartland Institute, the seventh International Conference on Climate Change (ICCC7) provided the second opportunity for Congressman Sensenbrenner to address the group. In his opening comments, Sensenbrenner said, “We’ve come a long way.”
He recounted: “When I last spoke, the House of Representatives was poised to pass the Waxman-Markey cap-and-trade bill; the United Nations was promising the extension and expansion of the Kyoto Protocol; and President Obama was touting Spain as our model for a massive increase in renewable energy subsidies. Three years later, cap-and-tax is dead; the Kyoto Protocol is set to expire; and Spain recently announced that it eliminated new renewable energy subsidies.”

Sensenbrenner told about the behind the scenes wrangling that went on to get the Waxman-Markey bill passed. “I was on the House floor on June 29, 2009, when then-Speaker Nancy Pelosi desperately pulled Members aside to lobby, beg, and bargain for votes for the Waxman-Markey bill.” It did pass. But “the electoral consequences for the proponents of these policies was severe.” Just 16 months later, in the 2010 elections, “over two dozen of the Members she convinced to vote ‘yes’ lost their jobs.”

It wasn’t just the Members who suffered harsh political ramifications for their support of the Waxman-Markey bill—which was supposed to nullify the impact of manmade global warming through a cap-and-trade scheme. Sensenbrenner contends that support of the manmade (anthropogenic) global warming position (AGW) also cost Al Gore the presidency back in 2004. He explained: “West Virginia’s 5 electoral votes would have tipped the election for Gore, and Gore’s near-evangelical support for climate change easily cost him the 42,000 votes he would have needed to win there.”

While there is little debate that the climate does change, there is debate as to what causes it. The camps are divided into two general groups along the line of human’s role—with Al Gore’s camp believing that the “science is settled” concluding that man’s driving of SUVs burning petroleum products that emit CO2 (and other symptoms of the developed world) is the cause, and the other disagreeing. The “other” is who gathered in Chicago last week amid the thousands of NATO protestors. The “other” not only disagrees with Al Gore’s AGW position—but they disagree with each other.

I attended session after session where sunspots were addressed, deep ocean circulation changes were discussed, the CO2 contribution of volcanoes was brought up, and the health impacts of a warmer planet were touted—just to name a few. I brought home reams of documentation, some of which are, frankly, beyond my comprehension.

Whether or not the documentable climate change—cooler in the seventies, warmer in the nineties, stable for the last decade (just to point out some recent changes)—is due to the sun or the sea, or myriad other causes, the key take away is that the science is not settled.

Four former NASA employees presented at ICCC7—two astronauts: Walter Cunningham (Apollo 7) and Dr. Harrison “Jack” Schmitt (Apollo 17). They talked about a letter sent to NASA Administrator Charles Bolden, Jr., in which they requested that NASA and the Goddard Institute for Space Studies (GISS) “refrain from including unproven remarks in public releases and websites.”
The March 28 letter, signed by 49 former NASA employees, declares that they “believe the claims by NASA and GISS, that man-made carbon dioxide is having a catastrophic impact on global climate change are not substantiated, especially when considering thousands of years of empirical data. With hundreds of well-known climate scientists and tens of thousands of other scientists publicly declaring their disbelief in the catastrophic forecasts, coming particularly from the GISS leadership, it is clear that the science is NOT settled.

“The unbridled advocacy of CO2 being the major cause of climate change is unbecoming of NASA’s history of making an objective assessment of all available scientific data prior to making decisions or public statements.”

It is the “unbridled advocacy of CO2 being the major cause of climate change” that should concern you and me—and, it is not just coming from NASA. It is coming from the White House and the EPA, from environmental groups and protestors.

The belief that CO2 is causing catastrophic climate change is the driver for today’s energy policy.
Based on a supposed “consensus,” politicians, and the nonelected bureaucrats they appointed, have, and are, making risky investments with taxpayer dollars (think Solyndra, et al); subsidizing “alternative” energies such as wind and solar that are not effective, efficient, or economical; blocking access to resources that are abundant, available, and affordable—which raises gasoline prices and punishes those who can least afford it; and regulating America’s most cost-effective electricity out of commission. The increasing energy costs are hurting all of America—individuals and industry—and our competitive edge.

Roger Helmer, a member of the European Parliament, offered these comments regarding wind energy and the entire green project in his presentation at ICCC7: “Wind plus gas back up results in virtually zero emissions savings. So, we are desecrating the countryside, we are wasting huge amounts of money, we are impoverishing our children, we are choosing poverty over prosperity—and after all that, we are not even achieving what we set out to achieve. This is madness, madness, madness writ large.”

Once you remove the manmade climate change/CO2 concerns, the foundation for expensive, intermittent “renewable” energy goes away—and there is a huge investment, emotional, ideological, and financial, in keeping the ruse alive.

In comparing the manmade climate change scheme to the European single currency, Helmer said: “Both of the projects are falling apart before our very eyes. But, as they fall apart, the true believers, especially the people with a financial interest—let’s not forget that these projects have attracted vast political and intellectual capital, but they’ve also attracted vast numbers of rent seekers and hangers on, and people whose jobs depend on these projects, and these people do not want to see them go away so these people are coming forward and—are thinking of every possible excuse which might explain what has gone wrong with the projects.”

No wonder there is a war. One side wants to “defend its findings,” while the other wants to “find the truth.”

While America is in an economic war, “advocacy of an extreme position, prior to a thorough study of the possible overwhelming impact of natural climate drivers, is inappropriate.” In this election season, all candidates would do well to remember the fate of Al Gore and his many AGW supporters. Sensenbrenner offered these wise words on energy policy: “Going forward, we must continue to oppose bad ideas and continue to support technological development the only way it works—by allowing markets to determine the technological winners and losers.”

Whether scientist or politician, policy analyst or media, one message that came through loud and clear at the ICCC7 is that we’ve come a long way in the climate change war, and we are winning, but we haven’t won yet! The climate change battle is at the center of global energy policy, and the countries that have the ability to develop their natural resources to produce cheap energy will be the victors.