The End Of The Myth Of Man-Caused Global Warming

The following article details how the concept of man-caused global warming (and climate change) should be dead and buried.  It won't be of course, because there are too many people whose reputations and livelihoods depended upon (they must save face) and still do depend on promoting this gigantic, terrible hoax.  Indeed, there are entire college departments offering degrees in "climatology", "environmental science" or "climate science".  That means for this charade to end there must be a lot of inertia to overcome, and a lot of government funding to be terminated.  That is just not going to happen very quickly.

If this climate "research" had been done by private business, it would have gone bankrupt and died long ago.  Instead, it serves as a prime example of how government involvement in research and development leads to corruption, breeds incompetence, and wastes an ungodly amount of taxpayers money.  Will we learn from this?  Maybe, a little bit, for a little while, but the same thing goes on in any endeavor that becomes political, which by definition, everything does when government "support" is involved.  Think solar energy (Solyndra), or wind power, electric cars, and a host of other activities.  Those of us who seek the truth about these things must be ever vigilant.  A quick scan of past articles posted on this blog alone illustrates how long and difficult battle it has been to reveal the truth about global warming.  We will however keep up the good fight, for truth, justice and limited government involvement and real, honest science.
Peter 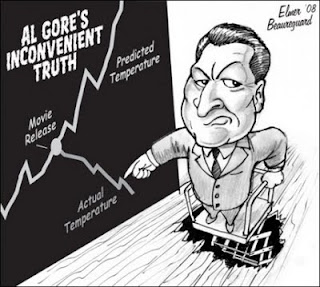 The Death of the Hockey Stick?

People who have been following the climate debate closely know that one of the most controversial and key elements of the controversy is the so-called “hockey stick” — a graph of supposed global temperature over the past centuries that ostensibly shows a dramatic increase in average temperature in the last century or so (the upward swoop of the graph at that point is the business end of the stick, with regard to the puck). It vaulted its inventor, Michael Mann of Penn State University, to climate stardom, with associated acclaim and government grants, when he first presented it in the late ’90s. It was the visual basis of much of the hysteria in recent years, from Al Gore’s Oscar-winning crockumentary [1] to bogus reports [2] from the UN’s Intergovernmental Panel on Climate Change (IPCC).

Unfortunately for those promoting the theory (and the potentially economically catastrophic policy recommendations supposedly supported by it), recent events indicate that the last basis of scientific support for the hockey stick may be crumbling. But to understand this, a little background is necessary.

Ultimately, in addition to Mann’s claim for the dramatic recent uptick (which we are supposed to presume was a result of the late industrial revolution and equally dramatic increase in carbon dioxide into the atmosphere as a result of the liberation of carbon from burning long-buried fossil fuels), Keith Briffa of the Climate Research Unit (CRU) at the University of East Anglia in England controversially declared, based on Eurasian data, that the well-documented Medieval Warm Period (MWP), from around 950 to 1250 CE — the European Middle Ages — didn’t actually exist.
This claim was important, if not essential, to Mann’s thesis, because his initial formulation only went back to 1400, the beginning of the so-called Little Ice Age. Critics of the theory thus argued immediately upon its presentation that it shouldn’t be surprising that the earth was warming now, given that we are still coming out of it, and that the medieval warming in the absence of late Carolingian SUVs and coal plants argued that the climate naturally cycled, with no need to invoke Demon Carbon. That is to say, to the degree that the hockey stick has a blade in the twentieth century, it would have another a millennium ago.

The theory has continued to take blows over the years since it was first presented. About a decade ago, a paper [1] was published by Willie Soon and Sallie Baliunis claiming that there was good evidence that both the (still extant) MWP and current warming were driven by solar activity rather than carbon emissions. But these initial attacks were beaten back by the climate mafia (as we now know from the leaked emails [3] between Mann and his partners in crime in East Anglia from two and a half years ago). The real damage came when a retired Canadian mining engineer, Steve McIntyre, and a professor at the University of Guelph, Ross McKitrick, started digging into Mann’s methodology, and found flaws in both his statistical analysis and data interpretation, and published a paper [4] describing them in Geophysical Research Letters in 2005. They showed that Mann’s methodology would generate a hockey stick almost independently of the data input, by feeding it spectral noise [5]. Later, Internet satirist (and apparent statistician by day) Iowahawk provided a primer on how to create a hockey stick at home [6], using a standard spreadsheet program.

Defenders of the theory have long claimed that even if there are problems with Mann’s method or data set, we have independent results from other research, such as that at the CRU, that confirm it. But this was a point of contention. In addition to the unscientific behavior in attempting to silence critics and keep them from publishing, we also know that the climate “scientists” had been withholding data that would help to resolve the controversy (more unscientific behavior, because it makes it difficult or impossible to replicate claimed results, and behavior that continues to the present da [7]y by the University of Virginia), even in the face of numerous Freedom of Information requests, on both sides of the Atlantic.

To no avail, McIntyre had been requesting data for years from Briffa, who had claimed to have independent Eurasian tree-ring analysis that confirmed Mann’s results, from a data set called the Polar Urals (Mann’s work was based on ancient California bristlecone pine trees). Unfortunately, paleoclimatologists had discovered that the Polar Urals data didn’t actually support the disappearance of the MWP, so they were in search of another Eurasian data set that would, and they found one called Yamal, gathered and published in 2002 by two Russian scientists.

McIntyre had wanted to see it for years, and in 2008, utilizing a bylaw of the Royal Society, he enlisted their aid in forcing Briffa to finally start to release the data. Unfortunately, he still didn’t get enough, at least initially, to make any sense of it. But he did notice that, first, it had sparse data for the twentieth century and second, that it, unlike the typical treatment of such data sets, was not supplemented by any regional data — Briffa was using it by itself. When McIntyre did such a supplementation himself using other data (reluctantly) provided by Briffa, the twentieth-century hockey-stick blade completely disappeared.

That was where things stood in 2009, just before the so-called Climate-gate email and model leak. After that, the CRU actually started to pull down data [8] that had been previously available for years. It was clear from the emails that Briffa had been telling one story publicly and another privately as to his reasons for not including the devastating data, but the tide finally turned last month, when the University of East Anglia was finally forced by the British Information Commissioner to at least tell McIntyre which data sets were used in its results. Let’s let blogger “Bishop Hill” (aka Andrew Montford, who has written the book [9] on the subject) tell the rest of the story [10] (and read the whole thing for a detailed description of the deception):


The list of 17 sites that was finally sent to McIntyre represented complete vindication. The presence of Yamal and Polar Urals had already been obvious from the Climategate emails, but the list showed that Briffa had also incorporated the Polar Urals update (which, as we saw above, did not have a hockey stick shape, and which Briffa claimed he had not looked at since 1995) and the Khadtya River site, McIntyre’s use of which the RealClimate authors had ridiculed.
Although the chronology itself was not yet available, the list of sites was sufficient for McIntyre to calculate the numbers himself, and the results were breathtaking. Firstly, the URALS regional chronology had vastly more data behind it than the Yamal-only figures presented in Briffa’s paper
But what was worse, the regional chronology did not have a hockey stick shape — the twentieth century uptick that Briffa had got from the handful of trees in the Yamal-only series had completely disappeared.
Direct comparison of the chronology that Briffa chose to publish against the full chronology that he withheld makes the point clear:
It seems clear then that the URALS chronology Briffa prepared to go alongside the others he put together for the 2008 paper gave a message that did not comply with the message that he wanted to convey — one of unprecedented warmth at the end of the twentieth century. In essence the URALS regional chronology was suffering from the divergence problem — the widely noted failure of some tree ring series to pick up the recent warming seen in instrumental temperature records, which led to the infamous ‘hide the decline’ episode.
Remarkably, however, Briffa did allude to the divergence problem in his paper:


These [regional chronologies] show no evidence of a recent breakdown in [the association between tree growth and temperature] as has been found at other high-latitude Northern Hemisphere locations.

The reason for dropping the URALS chronology looks abundantly clear. It would not have supported this message.

His emphasis.
And new results are coming out almost by the day. Earlier this week, McIntyre reportedly received [11]new Yamal data, which continued to confirm that there is no blade to the stick
What does this all mean? First, let’s state what it doesn’t mean. It doesn’t mean that we know that the planet isn’t warming, and it doesn’t mean that if it is, that we can be sure that it is not due to human activity.

But at a minimum it should be the final blow to the hockey stick, and perhaps to the very notion that bristlecone pines and larches are accurate thermometers. It should also be a final blow to the credibility of many of the leading lights of climate “science,” but based on history, it probably won’t be, at least among the political class. What it really should be is the beginning of the major housecleaning necessary if the field is to have any scientific credibility, but that may have to await a general reformation of academia itself. It would help, though, if we get a new government next year that cuts off funding to such charlatans, and the institutions that whitewash their unscientific behavior. 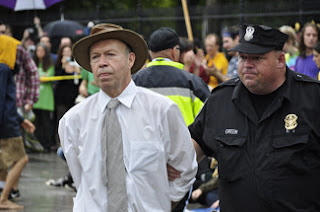 Finally I've found something that helped me.
Kudos!

I have been surfing online more than 4 hours today, yet I never found any interesting article like yours.
It's pretty worth enough for me. In my view, if all website owners and
bloggers made good content as you did, the net will be a lot more
useful than ever before.