I doubt anyone will ever be held accountable for all the global warming lies and Billions (Trillions worldwide) of wasted dollars, but the truth needs to be told.
Peter
http://www.climatechangedispatch.com/home/10108-prosecute-al-gore?utm_source=feedburner&utm_medium=email&utm_campaign=Feed%3A+climatechangedispatch%2FnkcO+%28Climate+Change+Dispatch+news%29
Prosecute Al Gore?
Written by Don Surber, Daily Mail blogs | April 16 2012 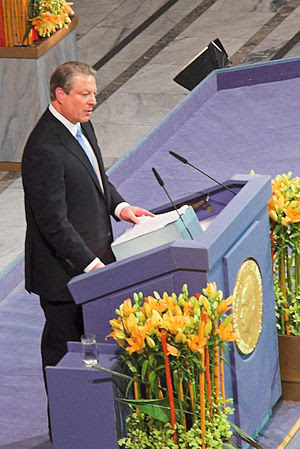 Al Gore - Nobel Peace Price 2007
(Photo credit: Wikipedia)
So far this month, the public has learned that the Arctic is overrun with polar bears, according to a Canadian study. The poster child for fear-warmongering by junk-science global warmists not only survives but thrives.
Then an actual count of penguins found that there are twice as many Emperor Penguins in Antarctica than previously thought, a second study found.
Then, another study found that far from melting in 23 years as the Nobel Peace Prize-winning IPCC report predicted, the glaciers of the Himalaya mountains are doing just fine.
The time has come to investigate James Hansen, Michael Mann, Al Gore and other global warming stars for fraud. They lied. They manipulated data. They made false predictions of doom in their over-heated sales pitches. I know that Hansen and Gore made millions off these false alarms of ecological doom. We must now hold them accountable for false claims and the spreading of rumors.
(continued here)
Posted by Peter at 2:06 PM

I really love to see how politics affect the Global Warming, its an important matter that politician should keep in mind that their decision somehow will have an impact to all of us, over all a nice sharing article thanks!

This is directly from the article you linked to about polar bears. It actually says the opposite of what you think it says. If you link to something, you should probably make sure it supports your argument, not refutes it.

“The science of the effects of climate change on polar bears in Hudson Bay is absolutely profound — and that is that basically the loss of sea ice reduces the body conditions of bears and bears with lower body condition produce fewer cubs and the bears collectively have lower survival rates.”

Put simply: Climate change is forcing bears to spend more time on land where there is virtually no food. Females are 30 to 40 kilograms lighter than they were in the early 1980s. And they’re producing fewer cubs.

“When you put it all together it summarizes a population that is not reproducing sufficiently to maintain the current abundance and that means the population is in decline.”

This isn’t just the case in the western Hudson Bay, but it is a pattern being repeated in other parts of the Arctic, Derocher said.