Now you're a racist if you question man-caused global warming......laughable if not so tragic! This is the kind of thinking where our state-run (failed) education system has led us.

I’ve written about the government’s war on light bulbs, its rule against working toilets, and its prohibition of washing machines that actually clean, so I sometimes cover environmental issues.
But I usually limit myself to examples of silly radicalism, such as the crazy claim that climate change causes AIDS, a reprehensible example of EPA thuggery, and a column about pointless recycling mandates.

Notwithstanding these criticisms, environmental protection is a legitimate role of government. Simply stated, we don’t want polluters to violate our property rights.
The challenge, of course, is how to conduct sensible cost-benefit analysis.
Where do we draw the line, for instance, on how much pollution cars should be allowed to emit? Or what are the best rules to ensure landfills don’t pollute groundwater?

These are important issues, but I will admit a bias. I am instinctively skeptical whenever self-proclaimed environmentalists start pontificating.

In part, this is because everyone has an incentive to exaggerate. The business community will always say that a new regulation imposes astronomically high costs, while environmentalists will claim minimal costs and say that thousands of premature deaths will be averted.

Since exaggeration is omnipresent in Washington, that’s not what really bothers me. My main problem with environmentalists is that they want to use so-called green issues to give government more power. And if you oppose them, you’re an evil person.

Consider the example of Professor Kari Norgaard of the University of Oregon. She thinks you’re mentally ill if you don’t agree with her.
Just in case you think I’m being unfair, here are some blurbs from a report in the UK-based Daily Mail. 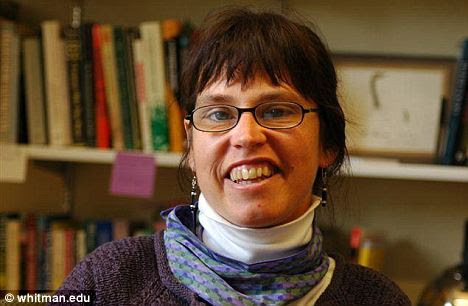 An Oregon University professor has controversially compared skepticism of global warming to racism. …The professor, who holds a B.S. in biology and a master’s and PhD in sociology, argued that ‘cultural resistance’ to accepting humans as being responsible for climate change ‘must be recognised and treated’ as an aberrant sociological behaviour. …Norgaard last week attended the annual four-day ‘Planet Under Pressure’ international conference in London, where she presented her controversial paper to delegates on Wednesday.

Professor Norgaard wasn’t the only oddball at the conference. The article also mentions that the attendees included a bunch of control freaks who want to force people to live in densely-populated cities.
The scientists behind the event recently put out a statement calling for humans to be packed into denser cities so that the rest of the planet can be surrendered to mother nature. And fellow attendee Yale University professor Karen Seto told MSNBC: ‘We certainly don’t want them (humans) strolling about the entire countryside. We want them to save land for nature by living closely [together].’
The folks at the Commentator sent a camera to the conference. Here’s a five-minute sample of what they saw.
Remarkable.
But the folks at the conference weren’t even the crazies, or at least the really bizarre environmentalists weren’t part of the video. For instance, I didn’t see the folks who don’t believe in bathing, the ones who sterilize themselves to avoid carbon-producing children, or the ones who produce (or use) hand-cranked environmentally-friendly vibrators.

Daniel J. Mitchell is a top expert on tax reform and supply-side tax policy at the Cato Institute.Be the first to read Daniel J. Mitchell’s column. Sign up today and receive Townhall.com delivered each morning to your inbox.