The Past Is The Key To The Future

It continually amazes me how the solid geological knowledge of past Earth history has been abducted and corrupted by global warming alarmists, so-called environmentalists, and the political powers that be in an attempt to control our lives.   Geologists studying recent Earth history have long known climate change is caused by forces far removed from man's activities.  Geologists need to speak out more, or be heard more; but that is another story.

The environmental "movement"  began as a noble attempt to protect our environment by ensuring a continual supply of clean air, water, energy and an abundant food supply.  Unfortunately this initial well-meaning idealism has been used to destroy America's economy, and much of that of the world.  In reality this "green movement" is harming the very people they claim to be helping and healing.

Without a healthy economy, very little good would exist.  That is just a fact.  I just read where the happiest and nicest country in the world is Norway.  (Forbes)  Is it because there are so many blue-eyed blondes living there?  Is it because of their religion?  Their form of government?  Their climate?  The answer is "none of the above".  The answer is because Norway has abundant oil and gas they produce by drilling offshore (The North Sea) in arguably the most hostile environment on Earth.  Oil and gas production is the "goose laying the golden eggs" for Norway.  That fact should be recognized and used as a example for countries which seek to prosper.  I hope someone tells those in charge of America's energy policy.
Peter

Flagrant Attempt to Mislead the Public about the Holocene Onset

Written by The Inconvenient Skeptic | April 09 2012

[h/t to Adam] As I noted last week, there is a new article in Nature that tries very hard to prove that CO2 increased prior to the warming at the onset of the current interglacial which is known as the Holocene. I read the article and was stunned by the conclusion and the charts which clearly showed that the warming took place after the CO2 rose. Since I have extensively studied much of the available data from the period 10-20k years ago, I knew right away that this paper did not give the same conclusion as any of the other data.
Last week I was also busy with work and didn’t have sufficient time to delve into the data, but I had time to consider how such a result could be achieved using real data.

I considered this with the idea of how the Earth’s climate really behaves. The Holocene began because the orbital parameters changed so that the Northern Hemisphere started to receive increased energy from the Sun starting 22,000 years ago. Any warming that took place would have been evident first in the NH. As the warming pushed back the ice caps and glaciers in the NH, the dynamics of the Earth change and a full interglacial period develops which is what causes the warming in the rest of the world. The key is the NH.

When I looked closely at the charts that were in the press release, I noticed the first curious item. 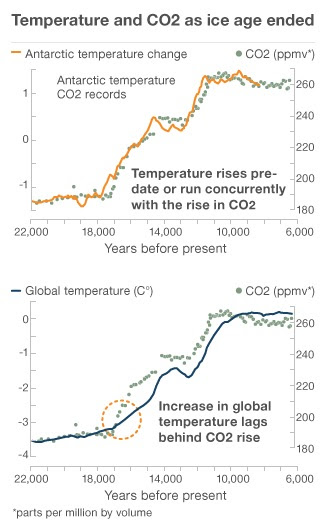 The critical point used in the Nature paper is 17,400 Years before Present (YBP). That is when the CO2 level starts to show the discussed rise. The Antarctic temperature is rising prior to that, but the global temperature only rises after CO2 increased.

On this, I was able to consider how to create the above charts. The key part would be to focus on the locations that would see the warming last, which would be the Tropics, especially the Tropical oceans. Those locations see the smallest change in temperature, but it really takes a big change globally to change the temperature in the tropics. So if I wanted to re-create the above charts, I would weight everything towards the tropics and use as little data as possible from the Northern Hemisphere.
Read rest…

Also a good reference on the subject:
http://scienceandpublicpolicy.org/originals/past_key_to_the_future.html
Posted by Peter at 12:34 PM