What causes these rocks to move? Is it global warming? Well, yes, in a way. Most of the valleys in the Nevada and California Basin and Range Province contained large lakes filled with water from melting glaciers covering the surrounding mountains during the last Ice Age. This is known as The Wisconsin Ice Age in North America and the Wurm Ice Age in Europe. (Search this blog for Lake Lahontan, for more information.)

One question is "how did the rocks get out onto the lake beds in the first place?" They probably rolled down the mountainsides due to natural erosional processes and came to rest on floating lake ice. When the floating ice melted and moved during the spring or summers, the rocks would sink to the bottom.

Now, what causes them to move? From personal experience I know that when the clay on the surface of these dry lake beds gets wet, like after a rainstorm, the clay becomes incredibly slippery. The best guess is when these slick, low-friction conditions are combined with high winds, the rocks slide across the surface, leaving these tell-tale tracks. Why hasn't anyone seen them move? You can not get out on the lake beds when they are wet. So in a way, these mysterious tracks are "caused" by global warming.
Peter

Someone sent this to me...
Subject: ANYONE HAVE AN ANSWER FOR THIS PHENOMENA????

MOVING ROCKS Thought this was a joke, googled it and found
"smithsonian study of moving rocks of death valley" says it is true........ http://mmmgroup.altervista.org/e-rocks.html

The moving rocks, also known as sliding rocks or sailing stones, are a geological phenomenon found in Racetrack Playa, a seasonally dry lake (a playa) located in the Panamint Mountains in Death Valley National Park , California . The rocks move across the surface of the playa, leaving long tracks behind them as they go, without human or an imal intervention. They have never been seen or filmed in motion. 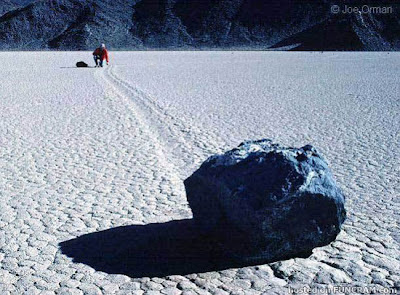 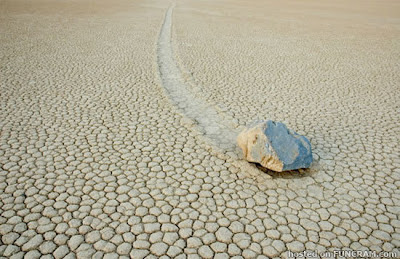 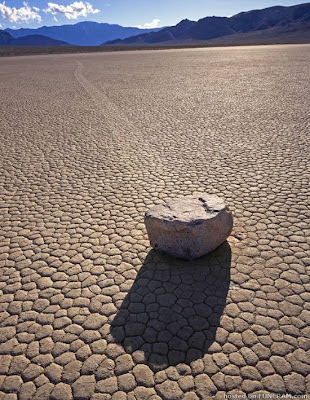 Racetrack rocks only move once every two or three years and most tracks last for just three or four years. Rocks with rough bottoms leave straight striated tracks while those with smooth bottoms wander.Most of the moving stones originate from an 850 foot (260 m) high hillside made of dark dolomite on the south end of the playa, but some are intrusive igneous rock from adjacent slopes. Tracks are often tens to hundreds of feet (low to high tens of meters) long, a few to 12 inches (8 to 30 cm) wide, and typically less than an inch (2.5 cm) deep. 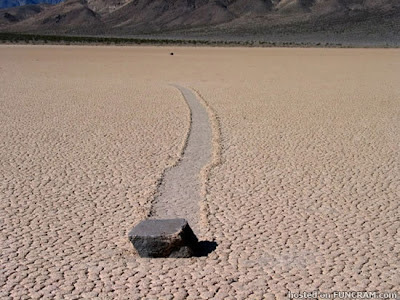 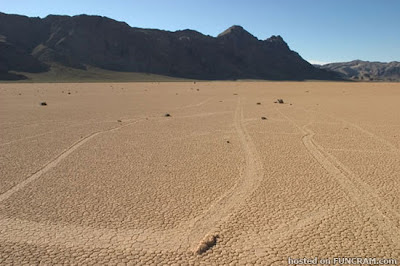 Over the years there were many speculations and possible explanations made on how the stones move, ranging from supernatural to very complex. Most hypotheses favoured by interested geologists posit that strong winds when the mud is wet are at least in part responsible. But some stones weigh as much as a human, which some researchers feel is too heavy for the area's wind to move. They maintain that ice sheets around the stones either help to catch the wind or move in ice flows.But both theories don't explain how two rocks right next to each other could go in two opposite directions or one could stay put while the one three times the size, doesn't. So far every attempt of explanation has been insufficient and purely assumptive. The mystery of moving rocks is yet to be revealed. 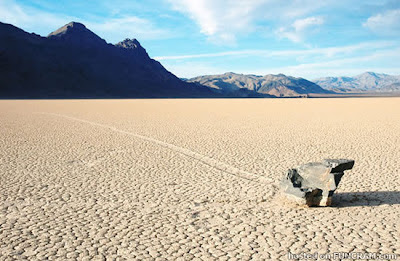 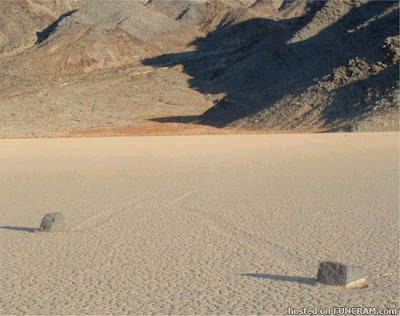 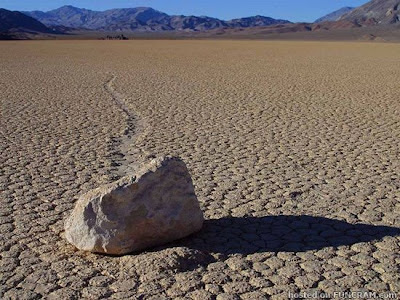 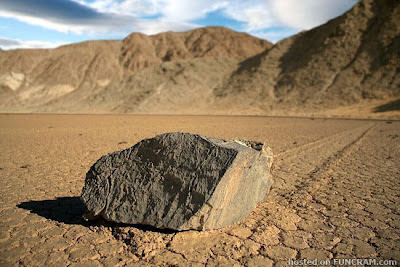 Death Valley geology field trip
Racetrack Playa
A sliding rock and its trail cut across Racetrack Playa. Photo by Marli Miller
The mysterious sliding rocks of Racetrack PlayaThe level surface of this parched basin provides the backdrop for one of Death Valley's most intriguing geological puzzles, the mysterious sliding rocks of Racetrack Playa. Scattered across the extraordinarily flat surface of Racetrack Playa, far from the edges of the surrounding mountains are boulders, some up to 320 kg (705 lb), and smaller pieces of rock. Stretching behind many of the stones you'll see grooved trails. Some are short, some long, some straight, some curvy. Clearly, these rocks must gouge furrows as they slide across the playa surface, yet no living person has ever witnessed these amazing rocks move! What makes these rocks skid as much as 880 meters (2890 ft.) across the flat playa surface? Recent scientific sleuthing provides some answers.
Satellite image of Racetrack Playa. The Last Chance range is on the left, Cottonwood mountains to the right of the light-colored playa surface.
The playa surface
Racetrack Playa is an almost perfectly flat dry lake bed nestled between the Cottonwood Mountains to the east and the Last Chance Range to the west. During periods of heavy rain, water washes down from nearby mountain slopes onto the playa, forming a shallow, short-lived lake. Under the hot Death Valley sun, the thin veneer of water quickly evaporates, leaving behind a layer of soft mud. As the mud dries, it shrinks and cracks into a mosaic of interlocking polygons.
Polygonal mudcracks form as mud dries in Racetrack Playa. Photo by Marli Miller