The gas being produced from the Barnett Shale represents one of the most exciting developments in the oil and gas industry in decades.
Peter

Barnett Boom Ignites Hunt for Unconventional Gas Resources
January 2007
The global hunt for unconventional gas reserves recently turned to an unlikely spot—a patch of north central Texas that already seemed tapped out after 50 years of intense oil and gas drilling.
Technology, economics and one man’s persistence transformed the Barnett Shale formation of the Fort Worth Basin into a booming new frontier.
As conventional petroleum reserves dwindle in the U.S., public pressure mounts to reduce the country’s dependence on foreign energy, and the price of oil and gas rises, energy companies are setting their sights on “unconventional” domestic sources. These include oil sands, coal beds and shales.

In less than a decade, the Barnett Shale play has become the largest natural gas play in the state of Texas and, as new wells sprout like bluebonnets across the Fort Worth region, it might soon become the largest in the nation.
“This play already covers parts of 15 or more counties,” says Eric Potter, associate director of the Bureau of Economic Geology at the University of Texas at Austin. “It compares favorably with the biggest of the old oil booms of the early 20th century.”
Of course this boom is different. The concrete-like shale gives up its gas grudgingly. So individual wells tend to be smaller and more expensive to operate. 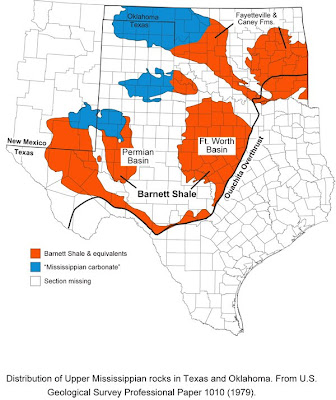 In less than a decade, the Barnett Shale play has become the largest natural gas play in the state of Texas and, as new wells sprout like bluebonnets across the Fort Worth region, it might soon become the largest in the nation.
“The East Texas gushers would win out hands down,” says Potter. “But there are so many [Barnett] wells that even though they are modest, the total output is going to be huge.“
This play is also different because much of the untapped gas lies under the highly populated Fort Worth metropolitan area. Oil and gas companies are finding new challenges drilling in an urban setting.
Now, some experts are wondering if the boom can go global. The search is on for similar shale formations around the world, including the Fayetteville Shale in Arkansas.

Going to the Source
The fact that there is a Barnett boom at all reflects a tectonic shift in thinking. In the past, drillers bypassed the source rock that generated the oil and gas and focused on the reservoir rock, where the resources were easier to extract. Typically, oil or gas exits from the source rock and migrates to places where it is trapped. And those traps—conventional fields—typically do not cover a large area.
“There would be a field here and then a lot of blank space and then a few miles over there would be another field,” says Potter. “But this kind of play, it just covers county after county. You’re looking at thousands and thousands of wells covering the land.”
According to Eric Potter, the 5,500 wells currently pumping gas in the Barnett Shale play will ultimately generate on the order of $35 billion for their owners and through an economic ripple effect, $100 billion for the Texas economy.

With new technologies for coaxing gas out of shales, drillers see the Barnett as both source and reservoir. One such technology is artificial fracturing—in which operators pump water and sand down a well to create fractures that liberate more gas from the rock.
Potter and his colleagues at the Bureau are analyzing the properties of shales across the state. Ultimately, they hope to apply their work to similar rock formations anywhere in the world.
“Now any kind of mudrock or shale that’s black, organic rich, reasonably thick, and reasonably deep we’re interested in,” says Potter. “The question is, all shales are not alike, so what makes a shale prospective as opposed to one that is not prospective? We don’t really know that yet.”

Wise Investment
Before he died in 2003, oilman and philanthropist John Jackson donated to The University of Texas at Austin royalty interests in roughly a thousand wells in the Fort Worth Basin, part of the bequest that led to the formation of the Jackson School of Geosciences. These wells were producing oil and gas from the younger Bend Conglomerate formation just above the Barnett.
The Bend Conglomerate was formed during the Pennsylvanian age, meaning it was laid down about 290 to 320 million years ago. The Barnett Shale, a marine basinal deposit of middle to late Mississippian age, was laid down about 320 to 360 million years ago.
Could the same wells produce significant amounts of gas from the older, deeper Barnett shale? Potter and his colleagues at the Bureau helped the University assess the long-term potential of the University’s royalty interests. 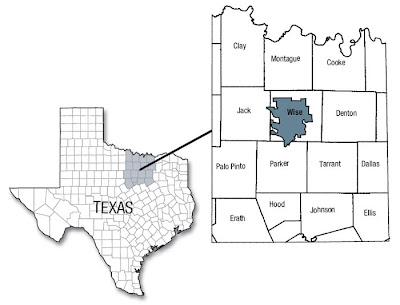 Royalty interests on about a thousand wells donated by John Jackson, mostly in Wise County, Texas help build one of the world’s premier geoscience programs at the Jackson School.
“The short answer is that we think that most of that acreage has quite good potential in the Barnett,” says Potter. “Eight of the top ten Jackson School royalty wells are producing from the Barnett Shale. We are forecasting that most of these holdings will produce from the Barnett.”
The University receives on average about two percent of the gross revenue from wells it holds royalty interests on. That money is being used to build one of the world’s premier geosciences programs at the new Jackson School. Because the money goes into general funds, it supports all of the activities of the school, including dean Eric Barron’s priorities: to create the world’s most student-centered earth science program, to attract and retain the best research talent, to increase the breadth and depth of the faculty and research community and to establish the “fabric of a great school.”

Researchers at the Bureau are providing technical analysis to help stimulate additional drilling and production in Wise County, where most of the University’s royalty interests are located. Emphasis so far has been on mapping the basic stratigraphic and structural framework, tracking successful drilling in the less developed southern part of the play, mapping similar conditions in Wise County, and remapping the thermal maturity of the formation. The maturity seems to relate directly to the gas to oil ratio, one of the key factors controlling gas flow rates.
According to Potter, the 5,500 wells currently pumping gas in the Barnett Shale play will ultimately generate on the order of $35 billion for their owners. As those companies pay taxes and wages, and as their employees and contractors in turn spend their money, there is an economic ripple effect, creating an overall value of about $100 billion to the Texas economy.
Of course, that is only counting current wells. Potter predicts that if gas prices stay relatively high, tens of thousands of new wells will be drilled in the coming decades.


“It’s a ubiquitous reservoir,” says Larry Brogdon, partner and chief geologist for Ft. Worth based Four Sevens Oil Company. “It’s everywhere. You can not drill a well without hitting the Barnett, and the gas is always there. The question is can you get it out or not.“
So far, operators have extracted 2 trillion cubic feet of gas from the Barnett Shale play. At about 1.5 billion cubic feet a day, that’s about 2 percent of the daily natural gas consumption of the U.S.
“When you can go from nothing to the second largest producing gas field in the country in a matter of just a few years, that makes a statement,” says Rich Pollastro, a geologist with the U.S. Geological Survey in Lakewood, Colorado. “That’s huge. And it could potentially become the largest producing field in the country. That was a real awakening for the country and now because of its success, industry and nations are looking at it worldwide.”

The Next Barnett?
In the summer of 2004, Southwestern Energy announced that the Fayetteville Shale formation in the Arkoma Basin had many of the same characteristics that made the Barnett Shale formation so desirable for gas production. Before the announcement, the company had quietly acquired mineral leases on nearly a half million acres of land.
The announcement set off another gas boom. Oil and gas operators familiar with the Barnett Shale rushed to Arkansas to get in on the action.
“The analog would be like a 19th century gold rush,” says Ed Ratchford, geology supervisor for the Arkansas Geological Commission in Little Rock. “Everyone stakes a claim. You don’t say this place is going to be better than this place. You don’t have time. People were leasing thousands of acres a day.”

Ratchford and his team maintain a well log library, a collection of well cuttings and cores from oil and gas wells across Arkansas. They used these to conduct geochemical tests on samples from the Fayetteville Shale and produce a regional picture of where good gas prospects were likely to be.
“We had companies all over us waiting for us to get this stuff done,” says Ratchford. “They were sitting out in the parking lot before we opened up. We were the only ones that had this information. It was critical for helping the operators know where to lease.”
In the excitement, many companies took a gamble on mineral leases.

Locations of the Barnett Formation. Source: USGS.
“We had a lot of companies that had leased before the report came out,” says Ratchford. “Then they had a big golf ball in their throats saying, ‘I wish I hadn’t leased here.’ That’s the risk you run when you lease big tracts of land in a boom without having the luxury of doing the science first.”
“Some of those companies are going to make a lot of money,” notes Ratchford, “some are going to be doing tax write offs. That’s the nature of exploration. In a situation like this, where there’s a frenzy, there are going to be winners and losers.“
It’s too early to tell how much gas will ultimately be recoverable from the Fayetteville Shale. Southwestern Energy, still the largest lease holder in the play, estimates that they will recover 17 trillion cubic feet of gas.

The future looks good for the Fayetteville play. Ratchford expects the number of wells producing in the area to rise from the current 80 to a couple hundred and that gas will be extracted for at least 15 or 20 years.
He also notes that oilfield services provider Schlumberger has recently built a 30,000 square foot facility in Conway, Arkansas and will employ approximately 100 employees at that facility. “They would not do this if they didn’t believe this would be a long term venture,” says Ratchford.
Other areas that have generated interest for possible large shale gas plays are the Caney and Woodford formations in Oklahoma, the Floyd formation in the Black Warrior Basin of northwest Alabama, and the Barnett and Woodford formations in the Permian Basin of Texas.
It remains to be seen if the rising star of the Barnett Shale play will be eclipsed by other gas plays.
“The Barnett might be as good as it gets,” says Pollastro. “No one knows for sure.”
He produced the U.S. Geological Survey’s assessment of the Fort Worth Barnett shale play in 2003. At the time, he estimated that it held a remaining volume of 26 trillion cubic feet of recoverable unconventional gas. Now he’s evaluating the Barnett and Woodford formations in the Permian Basin, where drillers have experienced mixed results.
“It’s a different animal,” he says. “The Barnett in the Delaware Basin part of the Permian Basin is deeper and is more clay rich, so at present it’s not working like everybody thought it would. It’s not as rich in organic material as the Fort Worth Basin. I think there’s good potential, but I think there will be a steep learning curve.”
by Marc Airhart