The successful production of large volumes of natural gas from shale rocks has enormously positive economic consequences for America, and indeed, the world. This is a relatively recent development of extreme importance. For an idea of how important natural gas is, consider exactly what it is and its many uses:

Natural gas is a gaseous fossil fuel consisting primarily of methane but including significant quantities of ethane, propane, butane, and pentane—heavier hydrocarbons removed prior to use as a consumer fuel —as well as carbon dioxide, nitrogen, helium and hydrogen sulfide.[1] It is found in oil fields (associated) either dissolved or isolated in natural gas fields (non-associated), and in coal beds (as coalbed methane).

Marcellus Shale - Appalachian Basin Natural Gas Play
New research results surprise everyone on the potential of this well-known Devonian black shale.
Super Giant Field in the Appalachians?A few years ago every geologist involved in Appalachian Basin oil and gas knew about the Devonian black shale called the Marcellus. Its black color made it easy to spot in the field and its slightly radioactive signature made it a very easy pick on a geophysical well log. However, very few of these geologists were excited about the Marcellus Shale as a major source of natural gas. Wells drilled through it produced some gas but rarely in enormous quantity. Few if any in the natural gas industry suspected that the Marcellus might soon be a major contributor to the natural gas supply of the United States - large enough to be spoken of as a "super giant" gas field.
Early Marcellus Estimates by USGSAs recently as 2002 the United States Geological Survey in its Assessment of Undiscovered Oil and Gas Resources of the Appalachian Basin Province, calculated that the Marcellus Shale contained an estimated undiscovered resource of about 1.9 trillion cubic feet of gas. [1] That's a lot of gas but spread over the enormous geographic extent of the Marcellus it was not that much per acre.
The First Hints of Big Production
Range Resources - Appalachia, LLC may have started the Marcellus Shale gas play. In 2003 they drilled a Marcellus well in Washington County, Pennsylvania and found a promising flow of natural gas [2]. They experimented with drilling and hydraulic fracturing methods that worked in the Barnett Shale of Texas. Their first Marcellus gas production from the well began in 2005. Between then and the end of 2007 more than 375 gas wells with suspected Marcellus intent had been permitted in Pennsylvania [2].
Recent Surprise EstimatesIn early 2008, Terry Englander, a geoscience professor at Pennsylvania State University, and Gary Lash, a geology professor at the State University of New York at Fredonia, surprised everyone with estimates that the Marcellus might contain more than 500 trillion cubic feet of natural gas. Using some of the same horizontal drilling and hydraulic fracturing methods that had previously been applied in the Barnett Shale of Texas, perhaps 10% of that gas (50 trillion cubic feet) might be recoverable. That volume of natural gas would be enough to supply the entire United States for about two years and have a wellhead value of about one trillion dollars! [5]
What is the Marcellus Shale?
Marcellus Shale: Videos, News, Maps, Lease & Royalty Information

Throughout most of its extent, the Marcellus is nearly a mile or more below the surface. The map at right shows the depth of the Marcellus Shale. These great depths make the Marcellus Formation a very expensive target. Successful wells must yield large volumes of gas to pay for the drilling costs that can easily exceed a million dollars for a traditional vertical well and much more for a horizontal well with hydraulic fracturing. Using the two maps together, some especially interesting areas can be seen. These are where thick Marcellus Shale can be drilled at minimum depths. Although this is a great oversimplification, it correlates with the heavy leasing activity that has occurred in parts of northern Pennsylvania and western New York.
Where is the Highest Production Potential?

Rock units are not homogeneous. The gas in the Marcellus Shale is a result of its contained organic content. Logic therefore suggests that the more organic material there is contained in the rock the greater its ability to yield gas. John Harper of the Pennsylvania Geological Survey suggests that the areas with the greatest production potential are those areas where the net thickness of organic-rich shale within the Marcellus Formation is the greatest. A map showing this distribution for the state of Pennsylvania is shown at right. Northeastern Pennsylvania is where the thick organic-rich shale intervals are located. 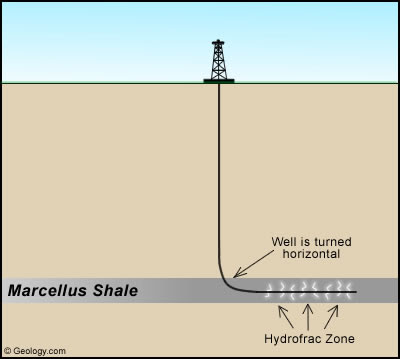 Before 2000, many successful natural gas wells had been completed in the Marcellus. The yields of these wells were often unimpressive upon completion. However, many of these older wells in the Marcellus have a sustained production that decreases slowly over time. Many of them continued to produce gas for several decades. A patient investor might make a profit from these low yield wells with slowly declining production rates. For new wells drilled with the new horizontal drilling and hydraulic fracturing technologies the inital production can be much higher than what was seen in the old wells. Then as production rates decline a well might receive new hydraulic fracturing treatments to boost production. The wells will eventually deplete but the fracturing treatments help to produce a more complete recovery of the natural gas. Because this method has not been applied long-term to wells in the Marcellus there is little production history data.
How Does the Gas Occur in the Rock? 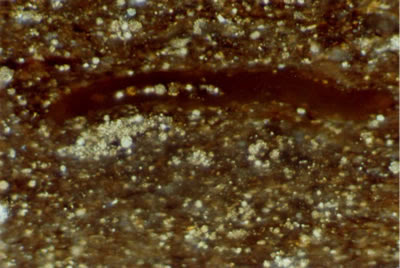 Natural gas occurs within the Marcellus Shale in three ways: 1) within the pore spaces of the shale; 2) within vertical fractures (joints) that break through the shale; and, 3) adsorbed on mineral grains. Most of the recoverable gas is contained in the pore spaces. However, the gas has difficulty escaping through the pore spaces because they are very tiny and poorly connected. Most historic wells in the Marcellus produced gas at a very slow rate because of the low permeability mentioned above. This is typical for a shale. However, the most successful historic wells in the Marcellus share a common characteristic: they intersect numerous fractures. These fractures allow the gas to flow through the rock unit and into the well bore. The fractures intersecting the well also intersect other fractures and those fractures intersect still more fractures. Thus, an extensive fracture network allows one well to drain gas from a very large volume of shale. A single well can recover gas from many acres of surrounding land. 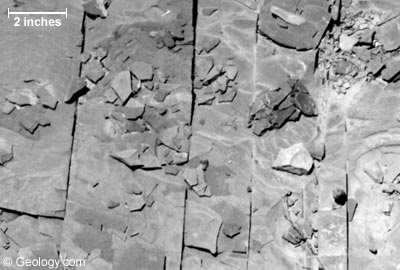 All natural gas land owners, and investors should appreciate your website. Pete you have done the community a good deed. Excellent website, I wish you continued success. I will link you next week. Please link us as well http://www.marcellusnaturalgas.com

Does shale gas contain a large amount of methane and if so will this not contribute to global warming?

Anon,
Yes, "Shale Gas" is primarily methane (CH4), or as it is usually called, "natural gas". It is what we use to cook our food and heat our homes and water. It is the the "cleanest-burning" of all so-called fossil fuels. Its only by-products are harmless water (H2O) and carbon dioxide (CO2).

Some people insist that adding carbon dioxide to the atmosphere causes global warming. However this CO2 is a common and harmless, invisible, odorless gas. You exhale it with every breath and plants need it in their growth process. If you want to know more about the causes of global warming search this blog for things like CO2, carbon dioxide, greenhouse effect, etc. There is a wealth of information. Don't be too quick to believe the alarmists and their lies about man-caused global warming.

In addition to sand large quantities of hazardous chemicals are also pumped into the shale and out into the fractures. Where they can migrate along with water and contaminate aquafers and groundwater.
The contaminated and radioactive fluids that are pumped back out of the drill holes must be disposed of which means trucking it to disposal sites. Municipal sewage treatment plants are usually not prepared to handle these fluids.
Air, noise and light pollution are also major impacts to the area. One would do well to look at web sites that discuss the impacts drilling companies have on landowners. Impacts they are not up front with because they know folks would not lease if they knew the companies could drill within 100 feet of their homes and place other structures even closer.

Cybil,
Thanks for your comment, but I think you are have many misconceptions about what shale gas is, and how the drilling, hydraulic fracturing and production of this natural gas takes place. Here is a good place to learn more about the subject.
http://geopetesview.blogspot.com/

This is too important an issue to allow yourself to be misled by the same group of people who so badly deceived us with the myth of man-caused global warming.