Sunspots And Weather, Is There a Link?

Here is an article describing how scientists try to link sunspot activity to weather events. There are many other studies correlating changes in the amount of solar energy received by the Earth with both major climate changes like ice ages, and more frequent episodic cycles of warming and cooling.

In this article, Gavin Schmidt, a climate modeler at NASA's Goddard Institute For Space Studies, a long-time proponent of man-caused global warming, discounts this study linking sunspots with increased rainfall in East Africa. Surely he can not dispute the longer-term relationship between the sun and the Earth's climate.

Schmidt is also a pricipal author at the climate website http://www.realclimate.org/
I think I'm going to begin referring to people who insist on man's responsibility for global warming and climate change as the "real deniers". What do you think?
Peter

JAXA/NASA
This composite image shows multiple solar flares on the sun. A new study suggests a link between sunspots and heavy rains in East Africa. 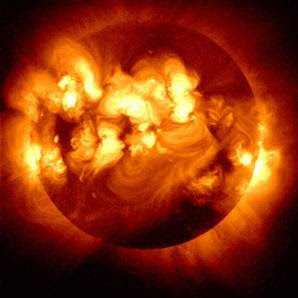