The Arctic sea ice has been melting since the end of the last ice age, around 12,000 years ago. It melts in the summer and freezes in the winter. Gee whiz, who would ever have thought? With the advent of satellites we can now see and measure with some precision how much ice there is and how much open water, even though the ice moves continuously. However, what is the significance of this? How long have these satellites been up there? Not long.

The cause of this greater melting this summer is pure speculation. For these scientists to blame it on man-caused global warming, and casually tossing out that cliche' phrase "greenhouse gases", is pure, irresponsible speculation. I for one, am getting really tired of hearing this excuse for every weather phenomena that science can not explain.
These ice scientists need to begin looking for another explanation for their unusual melting. Carbon dioxide emissions are not the culprit.
Peter

Arctic summer sea ice hits record low
Expert: In July 'it started to disappear at rates we had never seen before'

Arctic sea ice surrounds the U.S. Coast Guard Cutter Healy on July 22, 2006, as the icebreaker makes its way on a science expedition off Barrow, Alaska. This summer is likely to set a record in the minimum amount of Arctic sea ice. 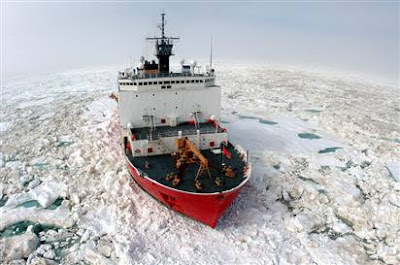 The summer sea ice in the Arctic is melting at a rate never before seen by experts, setting a record low the last two days that's likely to continue through September, top sea ice experts said in two new reports that suggest mankind's emissions of greenhouse gases are at least partly responsible.
The National Snow and Ice Data Center on Friday said conditions on Thursday and Friday were already below the 2005 record and would likely stay that way through the end of summer.
“Today is a historic day,” said Mark Serreze, a senior research scientist with the center, which is located at the University of Colorado-Boulder. “This is the least sea ice we’ve ever seen in the satellite record and we have another month left to go in the melt season this year.”

Chances of the summer ending at a record low are 92 percent, the Arctic Regional Ice Forecasting System group at the University of Colorado-Boulder said in a second report.
Just last April the group estimated only a 33 percent chance of a record. The forecast, researcher Sheldon Drobot said in a statement, was "dramatically revised ... following a rapid disintegration of sea ice during July."
"During the first week in July, the Arctic sea ice started to disappear at rates we had never seen before," said Drobot.

The 2005 record saw the September minimum for sea ice drop to 2.15 million square miles. Drawing on satellite data, Drobot's team expects the September minimum for 2007 to range between 1.96 and 1.75 million square miles. Sea ice researchers focus on September and March because they generally mark the annual minimum and maximum sea ice extents, said Drobot.
Sea-ice extent is defined as the area of an ocean covered by at least 15 percent of ice, and in the Arctic it has been declining at least since the late 1970s, when satellite data became available, said Drobot.

'Triple whammy' cited The snow and ice center said that, while the situation could improve in the next few weeks, Thursday and Friday saw the extent at 386,000 square miles less than the 2005 record, the center said. "The bottom line: 2007 has already unseated the 2005 record, but we don't yet know by how much," it added.

"Sea ice extent is particularly low in the East Siberian side of the Arctic (the Chukchi and East Siberian Seas) and the Beaufort Sea north of Alaska," the center stated. "Satellite data also indicates less ice in the channels of the Canadian Arctic Archipelago, with open water north of Ellesmere Island and Greenland — a region typically ice-covered year-round."
The center noted that in late June and early July "sea ice declined at a pace of up to 210,000 square kilometers (81,081 square miles) per day, or the equivalent of an area the size of Kansas each day. This rate was unprecedented in the satellite record."

NSIDC
White areas show Arctic sea-ice extent on Aug. 13. The magenta line, which is the median location of the ice edge from 1979-2000, shows how much smaller this year's extent is.
The center attributed the rapid sea ice losses to a "triple whammy;" unusually warm temperatures, winds that pushed ice away from the coast and unusually clear skies.
The center also cited a pattern that it said seems to reflect the "memory" of the ice to changes in recent decades. "In particular, there is mounting evidence of a shift from fairly thick ice to thinner ice, with this thinner ice more apt to completely melt out in summer," it said.
Drobot's team echoed the data about thinner ice.

"We have been seeing a sharp decline in thicker, multi-year ice that has survived more than one melt season," said researcher James Maslanik. "This has been replaced in many areas by a thin, first-year layer of ice as well as by younger, thinner types of multi-year ice. The thinner ice just does not have the mass to withstand the effects of warming climate."
'Significant' climate shiftCalling Arctic sea ice "one of the better predictors of climate change on Earth," Drobot noted that "there will probably be about two-thirds as much sea this September as there was 25 years ago — a good indication that something significant is happening with the climate."


Drobot said he was convinced that high levels of greenhouse emissions from smokestacks and tailpipes have combined with natural fluctuations, such as an increase in cloud-free days over the Arctic this summer, to spur the melt. "There is an element of human activity in the cause of this melt," said Drobot. "Natural variations can't explain everything."
The melt itself can act as a feedback loop and cause ever more melting, because water has a darker surface than snow. "Water acts like a sponge sucking up a lot more solar energy," or heat, Drobot said.

Serreze said that while some natural variability is involved in the melting “we simply can’t explain everything through natural processes.”
“It is very strong evidence that we are starting to see an effect of greenhouse warming,” he said.
The puzzling thing, he added, is that the melting is actually occurring faster than computer climate models have predicted. Several years ago he would have predicted a complete melt of Arctic sea ice in summer would occur by the year 2070 to 2100, Serreze said. But at the rates now occurring, a complete melt could happen by 2030, he said Friday. There will still be ice in winter, he said, but it could be gone in summer.

It could also open the Northwest Passage along the northern coast of North America and connect the Atlantic and Pacific Oceans to shipping by as early as 2020 or 2025, he said. That could be a cheaper option for many shippers than the Panama Canal, and it could open the region to energy exploration.

Melting Arctic ice could also fuel a new "Cold War" — one in which nations claim energy-rich waters for themselves. A Russian team on Aug. 2 planted a flag at the bottom of the North Pole. The United States, Canada and Denmark have also made moves to bolster their positions in the Arctic.
Reuters contributed to this report
Posted by Peter at 1:06 PM