Is This The First of NASA's Errors? What Else Are They Covering Up?

This current expose of how NASA handles historic temperature data, which is integral to modeling the climate and making predictions about global warming, demonstrates how easy it is to manipulate data. (See the following article.)

Are they going to have to do all of their climate calculations over, one more time. Will the United Nations' IPCC do the same? Should we be skeptical about the outcome? I say yes, very skeptical, and suspicious. Should NASA get away with this "slight of hand" trickery? There is politics here folks, going on at the highest levels of government and the media. We've been wondering when the global warming facade will begin to crumble. I think this is just the beginning.
Peter

NASA scientists this month corrected an error that resulted in 1934 replacing 1998 as the warmest year on record in the U.S., thus challenging some key global warming arguments, but the correction is being ignored, a conservative climate expert charged Wednesday. Yet at the same time, announcements that support global warming are considered "front-page news," said H. Sterling Burnett, a senior fellow at the conservative National Center for Policy Analysis (NCPA). 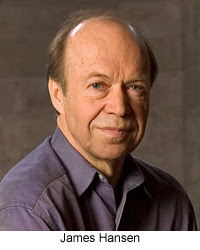 For his part, James Hansen, director of NASA's Goddard Institute for Space Studies, has called the correction is "statistically insignificant." Burnett challenged that assertion, saying the correction made it clear that NASA's conclusion -- that the majority of the 10 hottest years have occurred since 1990 -- is false. "Time after time, Hansen and other global warming alarmists present their data as 'the facts,' and [say that] 'you can't argue with data,' " he said. "Well, it turns out their data is just wrong. And when it's wrong, they want to say it's not important.

"The controversy began on Aug. 4, when blogger Steve McIntyre of the ClimateAudit.org website, sent an email to NASA asserting that the data collected by the agency after 1999 was not being adjusted to allow for the times of day when readings were taken or the locations of the monitoring stations. According to a blog posting by NASA climate modeler Gavin Schmidt, agency analysts then "looked into it and found that this coincided with the switch between two sources of U.S. temperature data." "There had been a faulty assumption that these two sources matched," Schmidt said. "The obvious fix was to make an adjustment based on a period of overlap so that these offsets disappear. "Schmidt said the data analysis was then adjusted accordingly, and a note of thanks emailed to McIntyre."The net effect of the change was to reduce mean U.S. anomalies by about 0.15 degrees Celsius for the years 2000-2006," which resulted in a "very minor knock" on information from earlier years, Schmidt added.

'Ignore the man behind the curtain'
The NCPA analyst also charged that because the change does not fit the mainstream media's view of global warming as an immediate and ongoing crisis, the incident was being ignored by television news networks and newspapers across the country. Cybercast News Service conducted a Nexis search for news articles over the past month containing the words "NASA," "1998" and "1934." As of Tuesday, Aug. 14, only eight newspapers had discussed the correction, along with United Press International (UPI) and the Fox News Channel.On Wednesday, however, a dozen major news outlets -- ranging from the Chicago Sun-Times and Tribune to the Los Angeles Times and CNN -- finally ran stories on the change, most emphasizing the resulting controversy that had erupted across the conservative blogosphere.

In the Washington Post, Hansen said that the critics were "making a mountain of a molehill. The change does nothing to our understanding of how the global climate is changing and is being used by critics to muddy the debate." "Hansen said that NASA generally does not release or discuss national weather statistics because it is more concerned with global patterns," the Post reported. "The agency that pays more attention to American temperature trends is the National Oceanic and Atmospheric Administration, which has said that most of the warmest years in the past century have been in the past 12 years."

"Hansen said the revised data do nothing to change that overall trend," the newspaper added. Burnett was highly critical of the Washington Post's coverage of the story. "The Post gave James Hansen -- the one who made the error -- four paragraphs to tell you why it's not important and why it should be ignored," he stated. "Hansen basically said, 'I screwed up, but just ignore the man behind the curtain,' and they let him get away with it.

"Burnett also dismissed the idea that the change is "statistically insignificant" because the numbers concerned were so small. "A few years back, an error in satellite data was found and corrected from 0.04 degrees of cooling per decade to 0.01 degrees, and that was front-page news," he said. "If a change of 0.03 degrees is significant, then what about this, which is five times more? If the one is important for making your case, then the other is important for undermining your case.

"What's really important is not that it shows whether it's warming or not -- because it doesn't," Burnett stated. "But we've supposedly got the best data in the world, and we're relying on data from a lot of places where they're not checking it nearly as closely as our guys. "As for NASA, Burnett charged that "they need mathematicians on their staff, not climatologists. What does it say when we had to have a blogger go in there and discover their error?"
Posted by Peter at 12:03 PM