Something To Think About: Air Quality

The following is an example of how misled the public is about air quality and the folly of predicting the future of climate change. What else are we misled about?
Peter 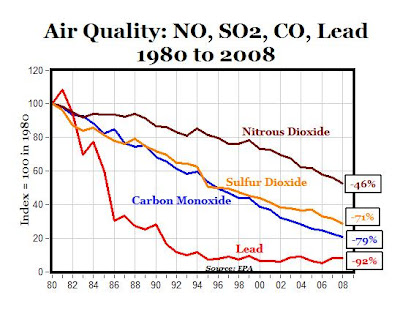 Earth Day (April 22) is only six weeks away, and I just noticed that the EPA recently updated air quality data for 2008 and thought it was worth featuring now in anticipation of the 40th anniversary of Earth Day:
Predictions made around the time of the first Earth Day in 1970:

“Air pollution is certainly going to take hundreds of thousands of lives in the next few years alone,” Paul Ehrlich in an interview in Mademoiselle magazine, April 1970.

“By 1985, air pollution will have reduced the amount of sunlight reaching earth by one half...” Life magazine, January 1970.
“Man must stop pollution and conserve his resources, not merely to enhance existence but to save the race from the intolerable deteriorations and possible extinction,” The New York Times editorial, April 20, 1970.

The world will be “...eleven colder in the year 2000. This is about twice what it would take to put us into an ice age,” Kenneth Watt, speaking at Swarthmore University, April 19, 1970.

“We are in an environmental crisis which threatens the survival of this nation, and of the world as a suitable place of human habitation,” Barry Commoner, University of Washington, writing in the journal Environment, April 1970.