Try and understand the logic of this. ClimateGate, among many recent developments, such as the failure of the climate meeting in Copenhagen, and the revelation that the United Nations Panel on Climate Change (IPCC) is hopelessly flawed, fraudulent, and decidedly un-scientific, and the case for man-caused global warming and/or climate change is dead.

With that clear, why is the Obama administration going to spend (waste) another $154 million to try and "capture" and store (sequester) harmless carbon dioxide gas from the burning of coal in a power plant? Let's say it again. Carbon dioxide is not a pollutant, in spite of what the politically driven, Obama controlled EPA might say. We exhale CO2 with every breath; plants need it to grow, and yet our wonderful government is going to spend another $154 million of taxpayers money to capture this harmless gas and pump it underground. It doesn't get much more idiotic than that.

Note how in the following article, published today in USA Today, that the "green-washed", ignorant reporter(?) and even the Energy Secretary, Stephen Chu uses the term "carbon pollution", when anyone who is half-informed knows he's talking about simple carbon dioxide!

This is carefully calculated deception. I think Americans are beginning to catch on. Will Congress? Will Obama? Not any time soon. They have their agenda to follow. To heck with logic and common sense.
Peter 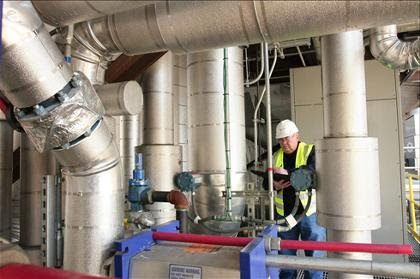 Al Ranson, a project manager for Alstom, readies a new facility last month that will capture the carbon dioxide produced by We Energies' coal-fired power plant in Pleasant Prairie, Wis.
CAPTION
None
Can coal really be clean? Environmentalists may be skeptical, but President Obama is moving ahead with efforts to create non-polluting coal.

On Tuesday, the Department of Energy announced that it will give up to $154 million to NRG Energy, a Texas-based company, to create a facility that will capture coal's carbon and store it underground, thereby reducing its greenhouse gas emissions. It's one of several such federally funded coal projects.

"Advancing our carbon capture and storage technology will create new in America and reduce our carbon pollution output," Energy Secretary Steven Chu, who won the 1997 Nobel Prize for physics, said in a statement.

In his State of the Union address, Obama called for a diverse mix of clean energy sources, including -- to the dismay of many environmentalists -- nuclear power plants and "clean coal technologies."

"We're highly skeptical," Bruce Nilles, the Sierra Club's national coal campaign director, says of Obama's plans to clean coal by capturing its carbon, according to a recent story by McClatchy Newspapers. He and other critics say it will be too costly to retrofit existing coal plants with such technology.

The Sierra Club says coal, which provides about half of U.S. electricity, should instead be phased out by 2030 and replaced by renewable power sources and energy efficiency, including efficient uses of natural gas.

The Natural Resources Defense Council, like other environmental groups, says there's no such thing as "clean" coal. France Beinecke, president of its New York City chapter, says "every single step in the coal power cycle is dirty," but she agrees with Obama's plan to fund efforts to clean it.

NRDC believes that a technology known as carbon capture and storage for coal plants should be included in the (climate) bill. This is what President Obama was referring to as "clean coal." We don't think that term is appropriate, but the technology really will reduce global warming pollution from power plants.

How does this technology work?

It removes carbon dioxide from coal's smokestack emissions, compresses it and pumps it deep underground, where it's stored. Such techniques for large coal plants have doubled the cost of producing power, so research is aimed at finding more cost-effective methods.

NRG Energy, which will match the Energy Department's funding, will build a 60-megawatt carbon capture demonstration facility at its plant in Thompson, Texas.

"Development and deployment of these carbon capture technologies at scale, not only in the United States but also worldwide as well, is essential if we are to meet successfully the challenge of global climate change," David Crane, president and CEO of NRG Energy, said in a statement.

Scheduled to begin operating in 2013, the project is designed to capture 90% of incoming carbon dioxide, compress it and use it to enhance oilfield recovery operations.

A report to be released Wednesday by Advanced Resources International, a research and consulting firm, says capturing carbon and pumping it into oil reservoirs could increase U.S. oil production.