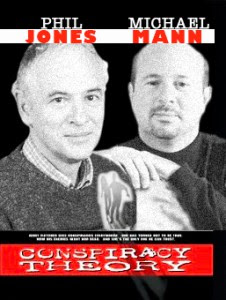 The following comments by George Monbiot would be hilarious if they weren't so sad and serious. This George Monbiot seemingly believes that the reason the myth of man-caused global warming is coming apart is because people don't believe science! He must be delusional or at least overcome by a huge dose of hubris.

Speaking for myself, I was at first just mildly amused by Al Gore's alarmism over his claims of imminent doom because of man-caused global warming. However as I began looking into the things behind the movement to "stop global warming" and weighing it against my knowledge and experience as a professional geologist, I could see clearly that it is and was all a great hoax.

I have no sympathy for this George Monbiot for wasting his "life's work." He was played for a fool. The blame is on him. Will he accept responsibility, or maybe blame the "climate scientists" who have deceived him? I doubt it. We'll be hearing more whining from those who have been conned by Al Gore and all the other phony "environmentalists". The following comes from the excellent blog here.
Peter

George Monbiot has an epiphany about the collapse of the global warming hoax:

Perhaps we have to accept that there is no simple solution to public disbelief in science. The battle over climate change suggests that the more clearly you spell the problem out, the more you turn people away. If they don’t want to know, nothing and no one will reach them. There goes my life’s work.

George blames John Q. Public for not ‘believing in’ science, when he should be calling for the heads of those who perverted science to the point where it became a matter of faith over facts. They are the ones who made us question whether we were being fed hard science or rank propaganda.

There are other places where you can read about why Monbiot is off-base with his accusations, The Daily Bayonet is going to use George’s moment of clarity to remind hippies about the nightmares that sprouted from the green dream.

1. Your Prius wants you dead.

2. Biofuels do hurt the poor and hungry.

3. Solar power is a pipe dream.

Another geologist non-believer. I'll bet you're an older geo. All the young ones I know are all AGW believers. I don't understand this. Something has changed in undergraduate science since I went through, I don't know what. What is taught in science now that wasn't taught before? Why does youth make you a believer and why does age make you a non-believer?

From what I have heard they do not present the "skeptics" point of view in most, if not all science classes. So our young people have been manipulated and deceived, hearing only one side of the story.

Then there is peer-pressure and political correctness. It is far easier to follow the herd rather than think independently and critically. This is not an over-night phenomenon. It has been building for decades. We have an entire generation of young students who have effectively been brainwashed by the "liberal elite" who promote environmental nonsense like man-caused global warming.

Everyone is now having a very rude awakening. Will there be an angry backlash when people learn they have been misled? I don't know; maybe if the economy and job prospects are bad, long enough; then maybe our young people will catch on.
Peter

Pete claims variously to be a "scientist" and / or a "geologist." But it is pretty clear he is neither.

Pete's motivation is almost entirely political and based on poorly informed sources like himself. If there is distrust of the scientific community it is because of people like Pete who misinform John Q. Public from their bully pulpits on the internet.

At least Pete doesn't censor and try and silence those with differing opinions, unlike the climate "scientists" behinde the ClimateGate scandal.

It is true, Pete does not "censor," but I suspect this is because he doesn't properly understand the moderation function.

Oh, and by the way, there is no good proof that any climate scientist censored anything. East Anglia has been cleared of any wrongdoing. The "censorship" argument is pure deniosphere urban legend perpetrated by people like yourself and Pete.

Anonymous,
Oh yeah, Pete doesn't "understand", and you do?

The climate scientists at CRU East Anglia were exonerated by the same political body that sanctions them in the first place. Duh...this is like letting the foxes guard the henhouse. We all know the fraud, it is plain to see in the Emails, the loss of data, the manipulation of data, the bullying and control of the peer review process, the refusal to release the computer codes, the lack of peer-reviewed sources in the IPCC reports.

You're being intentionaly daft. ClimateGate does not represent one individual mistake, but a systematic pattern of action and intention designed to manipulate and coerce people into believing the myth of man-caused global warming. Anonymous, you're in denial, or some sort of intellectual fog.