Here is a link to a good website which deals with the issue of glaciers and sea ice. Are they melting or expanding? We've been bombarded with pictures of melting glaciers and rising sea levels. We're told we're headed for catastrophe because of global warming. Is any of this true? Check out this website: http://www.iceagenow.com/Growing_Glaciers.htm

Here's a (partial) list of the specific glaciers that are growing:
NORWAY Ålfotbreen Glacier Briksdalsbreen Glacier Nigardsbreen Glacier Hardangerjøkulen Glacier Hansebreen Glacier Jostefonn Glacier Engabreen glacier (The Engabreen glacier is the second largest glacier in Norway. It is a part (a glacial tongue) of the Svartisen glacier, which has steadily increased in mass since the 1960s when heavier winter precipitation set in.)
Norway's glaciers growing at record pace. The face of the Briksdal glacier, an off-shoot of the largest glacier in Norway and mainland Europe, is growing by an average 7.2 inches (18 centimeters) per day. (From the Norwegian daily Bergens Tidende.) See http://www.sepp.org/controv/afp.htmlClick here to see mass balance of Norwegian glaciers: http://www.nve.no/ Choose "English" (at top of the page), choose "Water," then "Hydrology," then "Glaciers and Snow" from the menu. You'll see a list of all significant glaciers in Norway. (Thanks to Leif-K. Hansen for this info.)

CANADA Helm Glacier Place Glacier
FRANCE Mt. Blanc
ECUADOR Antizana 15 Alpha Glacier
SWITZERLAND Silvretta Glacier
KIRGHIZTAN Abramov
RUSSIA Maali Glacier (This glacier is surging. See below)
GREENLAND See Greenland Icecap Growing Thicker Greenland glacier advancing 7.2 miles per year! The BBC recently ran a documentary, The Big Chill, saying that we could be on the verge of an ice age. Britain could be heading towards an Alaskan-type climate within a decade, say scientists, because the Gulf Stream is being gradually cut off. The Gulf Stream keeps temperatures unusually high for such a northerly latitude.
One of Greenland’s largest glaciers has already doubled its rate of advance, moving forward at the rate of 12 kilometers (7.2 miles) per year. To see a transcript of the documentary, go to http://www.bbc.co.uk/science/horizon/2003/bigchilltrans.shtml
NEW ZEALANDAll 48 glaciers in the Southern Alps have grown during the past year.The growth is at the head of the glaciers, high in the mountains, where theygained more ice than they lost. Noticeable growth should be seen at the foot of the Fox and Franz Josef glaciers within two to three years.(27 May 2003) Fox, Franz Josef glaciers defy trend - New Zealand's two best-known glaciers are still on the march - 31 Jan 07 - See Franz Josef Glacier

SOUTH AMERICA - Argentina's Perito Moreno Glacier (the largest glacier in Patagonia) is advancing at the rate of 7 feet per day. The 250 km² ice formation, 30 km long, is one of 48 glaciers fed by the Southern Patagonian Ice Field. This ice field, located in the Andes system shared with Chile, is the world's third largest reserve of fresh water. http://en.wikipedia.org/wiki/Perito_Moreno_Glacier - Chile's Pio XI Glacier (the largest glacier in the southern hemisphere) is also growing.

UNITED STATES - Colorado (scroll down to see AP article) - Washington (Mount St. Helens, Mt. Rainier* and Mt. Shuksan) (scroll down to see photo of Mt. Baker) - California (Mount Shasta - scroll down for info) - Montana (scroll down for info) - Alaska (Mt. McKinley and Hubbard). (scroll down to see article on Hubbard Glacier)
Antarctic ice grows to record levels 13 Sep 07 - While the Antarctic Peninsula area has warmed in recent years and ice near it diminished during the Southern Hemisphere summer, the interior of Antarctica has been colder and ice elsewhere has been more extensive and longer lasting,See Antarctic ice grows to record levels..
Global Warming? New Data Shows Ice Is Back19 Feb 08 - A Feb. 18 report in the London Daily Express showed that there is nearly a third more ice in Antarctica than usual, challenging the global warming crusaders and buttressing arguments of skeptics who deny that the world is undergoing global warming.See Most snow cover since 1966..
Mount St. Helens’ Crater Glacier Advancing Three Feet Per Day 25 Jun 07 - See Crater Glacier..
Mount St. Helens glacier (Crater Glacier) growing 50 feet per year September 20, 2004 - See Mount St. Helens
Glaciers growing on California's Mount Shasta! 12 Oct 03 - See Mount Shasta Glaciers Growing
Geologists Unexpectedly Find 100 Glaciers in Colorado 7 Oct 01 See Colorado Glaciers Growing
Washington's Nisqually Glacier is GrowingSee Nisqually Glacier
Glaciers in Montana's Glacier Park on the verge of growing 5 Oct 2002. See Glacier Park
Antarctic Ice Sheet is growing thickerSee Antarctic Icecap Growing ThickerSee construction crane buried in the Antarctic Ice Sheet
* * *
Himalayan Glaciers Not ShrinkingGlacial Experts Question Theory of Global Warming15 Feb 07 - See Himalayan Glaciers Not Shrinking..Many people have asked why some glaciers in South America are melting. I think it is perfectly understandable. Remember, we have had two of the strongest El Ninos on record during the past 21 years. During an El Nino, a narrow band of the Pacific Ocean warms by as much as 14 degrees. This band of warm water travels east essentially along the equator until it slams into South America.
It seems logical that the increased rainfall caused by El Nino, plus the warmer winds blowing across the warmer water, could hasten glacial melt. But let me say it again. I do not believe that this is caused by humans, I think it is caused by the El Nino phenomenon, which is caused by underwater volcanism, which is increasing due to the ice-age cycle.
With this said, let me point out many glaciers in South America remain stable, and some - including the Pio XI Glacier and the Perito Moreno Glacier - are growing. The Pio XI Glacier is the largest glacier in the southern hemisphere. The Moreno Glacier is the largest glacier in Patagonia.
I find it curious that news reports do not mention these two glaciers.
* * *
Contrary to previous reports, Arctic ice did not thin during the 1990s, say researchers at the Department of Oceanography at Göteborg University in Göteborg, Sweden. http://www.envirotruth.org/images/ice-in-90s.pdf

.. Alaska Glacier Surges -17 Mar 06 See McGinnis Glacier ..Look at what's happening on Mt. Baker, in Washington State. (Mt. Baker is near Mt. Shukson, where glaciers are now growing.)
This is a photo of my friend Jim Terrell taken onMt. Baker, Washington. Jim is more than six feettall. See the black line about six feet above his head?That's where the snow from the winter of 1998/99stopped melting. Above that, is snow that nevermelted from the winter of 1999/2000. Why isn'tthe media reporting this sort of thing?..Click here to read this in Espanol: http://mitosyfraudes.8k.com/articulos-3/PorHielo.html
Thanks to Eduardo Ferreyra, who translated this material into Spanish for the Argentinean Foundation for a Scientific Ecology.)
Photo by Mazz Terrell19 July 2000
..See also Growing_Glaciers See also Greenland Icecap Growing Thicker and Antarctic Icecap Growing Thicker 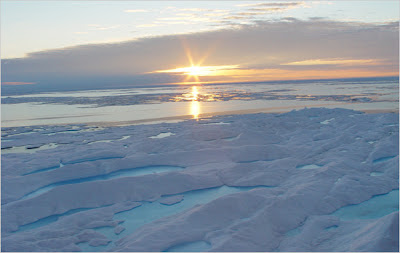 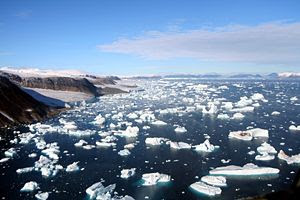 I agree the ocean water is warming But I feel this is a climate cycle. Look back to billions of years ago when they found tropical plants in antartica. We are not the cause of the earthquakes and underwater volcano activity. But what I would like to know is what is the connection to volcanoes and an ice age? I have been following the earthquakes and volcanos around the world. Major increase in both from 5 even 3 yrs ago. But need a clue on volcanoes and ice age is it because the sun gets blocked out or what??
SL

Climate change, and ice ages are cyclic, or regular....and are directly related to changes in the amount of energy the Earth receives from the Sun. Man's very recent presence on Earth has no relationship to either of these natural events.

RE:"Here's a (partial) list of the specific glaciers that are growing:"
I think you need to read the references you refer to more carefully. http://www.nve.no/admin/FileArchive/79/report2006.pdf
If you actually go to this link and fully read what they say you will see that the glaciers advance and retreat in length from time to time AND the glacier in question is actually retreating.

thanks enjoyed the article