Global Climate Models Are Hypotheses And Can NOT Test, Or Prove Anthing...Says Top Scientist

Dr. Pielke makes a good point here. Global climate computer models can not test or prove the exisitence of man-caused global warming. Computer models are hypothesis, or ideas based on an extremely complex set of assumptions. The only way any model can be "tested" is by verifying its conclusions with real world, measured observations. Currently, these models that are claimed to demonstrate man-caused global warming and climate change fall far short of reality.
Peter

Short But Informative Exchange Of Viewpoints On Modeling By Tom Knudson, Bill Gray and Steve Lyons
By Roger Pielke Sr.
There is an interesting exchange of views by Bill Gray, Tom Knudson and Steve Lyons at the Bahamas Weather Conference (Thanks to Bob Ferguson for alerting us to this short video.)
Climate Science has just one comment on this video. Tom Knudson claims that the global climate models can be used to test theory (such as his claim on the dominance of CO2 as the driver of climate change).

However, Tom Knudson makes the very serious mistake of stating that models can test his claim. The models are hypotheses and cannot test anything! They can be used to improve our understanding of how a system works, but their results must be tested against real-world observational data. 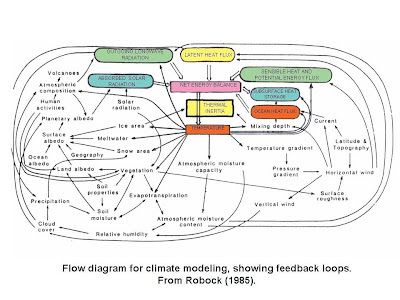 See larger image here. The complexity of the atmospheric processes climate models try to deal with, many of them poorly understood or given wrong feedback signs
His failure to properly communicate what models really should be used for, unfortunately, permeates popular and media preceptions of the climate change issue, and is resulting in very poor policy decisions (e.g., see the April 15th, 2008 post on Prometheus entitled ”Biofuels and Mitigation/Adaption").
-->
Posted by Peter at 12:05 AM

This is half the story. The other half is that models can, in effect, be run backwards to see if a given conclusion squares with actual, known facts. Many of the climate models do exactly that, using today's data and pushing it back into new information being revealed from ice cores, satellite history and other gathering points.

I'd be happy to post an article or a link to an article showing how carbon dioxide caused past changes in climate. That is the real issue here. We all know climate continually changes, and it does so cyclically. Can computer models explain past changes is climate and how these natural changes do not completely dominate or control today's climate changes?

email me if you wish
geo-pete@live.com

This is stated by scientists so it s only fitting for me to believe it. It is so based on facts and not on opinions.

Excellently written article, if only all bloggers offered the same content as you, the internet would be a much better place. Please keep it up!

Very enlightening and beneficial to someone whose been out of the circuit for a long time.

Wow, I love your site, big thank you to these ideas, and note in the first place that I fully agree with you! Let me emphasize, yes your article was excellent, I was thinking about all this and more the other day. This is my very first comment here and I’ll come back with pleasure on this blog!