Politicians And Liberal Policy Makers Take Note: Buying Into The Bad Carbon Myth Is Damaging To Your Career


Obama is behind the curve again.  His advisers (or his teleprompter) are putting out totally flawed ideas that other governments around the world are recognizing as abysmal failures.  Here, now, I am referring to the idea of carbon taxes, carbon offsets, or any other schemes to raise tax revenues on the backs of higher energy prices for consumers.

Politicians around the world who bought into the idea of fossil fuel-burning, carbon dioxide causing global warming and climate change are realizing what a mistake they have made.  It is costing not only the public in terms of lost jobs, higher energy costs, and a lowered standard of living, but now as near bankruptcy looms, politicians are the ones feeling  the heat.  It will only get warmer in the frying pan these self-serving clowns (politicians) find themselves in.  The following article describes the problems liberal politicians in Australia are encountering because they have bought into the climate fear-mongering.  I have no sympathy.  They should, and do know better.  They have allowed the greed of carbon taxes overwhelm the obvious.  Man's activities are not causing catastrophic climate change, and to try and alter the global climate is political folly, or even suicide.  Eventually, the truth prevails.
Peter

Australia's carbon mess a warning to the world: Clyde Russell 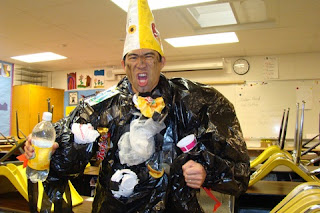 The evil Mr. Carbon scaring the children.
Source:
Wed Jul 17, 2013 1:47am EDT
--Clyde Russell is a Reuters market analyst. The views expressed are his own.--
By Clyde Russell
LAUNCESTON, Australia, July 17 (Reuters) - Any government thinking of introducing policies to limit carbon emissions should look at Australia for an example of how not to do it.
Australia's efforts to combat climate change have been poison to politicians from all sides of the debate, contributing so far to the demise of two prime ministers and an opposition leader, and there may be more to come.

The latest twist has seen Prime Minister Kevin Rudd decide to switch from a straight tax on carbon emissions to a floating emissions trading scheme (ETS) a year earlier than planned.

This has nothing to do with improving the workings of the scheme or limiting carbon emissions and everything to do with trying to win back voters angered by rising electricity prices and industries that have seen their international competitiveness eroded by the tax.

The theory is that power and other prices will decline as the cost of carbon permits is expected to be around A$6 per tonne - the level at which European permits are currently priced - compared to the tax of A$25.40 ($23.09) per tonne that had been planned from July 2014.

Assuming European carbon permits don't rise in price, which is a fairly big call given efforts to reduce the supply of permits, Rudd's changes will save the average Australian household A$4 a week in electricity costs.

Whether this is enough to assuage public anger and help Rudd's Labor Party win re-election will become clear in the coming months as he has to call a federal election by end-November.
But Rudd's efforts to remove the carbon tax as an election issue only serve to underline how badly the whole thing has been handled.

When Rudd was first elected prime minister in 2007 he called climate change the "greatest moral, social and economic challenge of our time", signed Australia up to the Kyoto Protocol and proceeded to design an ETS.

This even enjoyed rare bi-partisan support from the then leader of the Liberal opposition Malcolm Turnbull.

However, it was Turnbull's support for the ETS that helped undo his leadership and he was ousted by his colleagues in December 2009, being replaced by the more conservative Tony Abbott, who withdrew his party's support for Rudd's plans.

Rudd's own popularity fell as he struggled to gain public support for his carbon scheme and a controversial new mining tax, leading to his ouster in a party coup in June 2010.
His replacement as prime minister, Julia Gillard, scrapped the planned ETS, making a promise that any government she led wouldn't introduce a carbon tax.

This commitment came back to haunt her after the August 2010 election, in which she managed to hang on to power by cutting a deal with Australian Greens and two conservative independent lawmakers to form a minority government.

Part of her agreement with the Greens was the introduction of a carbon tax with a fixed price per tonne of emissions up until July 2015, at which point it would change to a floating, traded price.
The broken promise was seized upon at every opportunity by the Liberal opposition and conservative media commentators, and in turn contributed to Gillard's poor performance in opinion polls.
When these polls showed her Labor Party heading for a massive defeat in an election she scheduled for September, her colleagues once again ousted a prime minister, bringing back Rudd in a party room vote last month.

Rudd's popularity with the public has seen the Labor Party inch closer to the Liberals in opinion polls, putting pressure on Abbott, who courted ridicule as a climate sceptic earlier this week by describing the ETS as a "so-called market in the non-delivery of an invisible substance".
However, the Liberals are still ahead in opinion polls and if they win the upcoming election, Abbott has promised to scrap the carbon tax and the move to an ETS, replacing it with what he terms "direct action" on climate change.

But even if his party does win the election, it may not control both houses of parliament, and the lack of a majority in the upper house Senate may cruel Abbott's plans, as legislation has to clear both chambers.

It's little wonder that businesses and the public want some kind of resolution to the issue, but the upcoming vote may not deliver this, at least not immediately.
Part of the problem with Gillard's carbon tax is that it was more of a welfare programme than a plan to reduce emissions.

The tax raised was used to fund a raft of welfare measures to compensate for the higher prices caused by the tax.
The plans of both Rudd and Abbott would see the revenue from the tax fall dramatically or disappear altogether, but the welfare payments would remain, leaving the nation's budget with the worst possible outcome.
Rudd said his plan to move earlier to an ETS would cost the budget some A$4 billion, which would be recouped through spending cuts and tightening rules around company-funded vehicles for employees.

Abbott has so far only promised to end a small portion of welfare payments and seek spending cuts across the government.
Absent from both plans is much talk about climate change and carbon emissions.
Australia is the world's 15th-largest polluter and the highest per capita in the developed world, largely as a result of 80 percent of power being coal-fired and the prevalence of carbon-intensive industries such as mining and liquefied natural gas plants.

The existing carbon tax may actually be able to claim some credit for reducing emissions, with Australia's overall greenhouse gas emissions dropping 0.2 percent in 2012 from the prior year, and those from electricity generation by 4.7 percent.
But this success, while modest, is completely drowned out by the political machinations.
What the Australian experience shows is that any government tackling climate change needs as broad a consensus as possible, and that it should be done for the right reasons, not political expediency