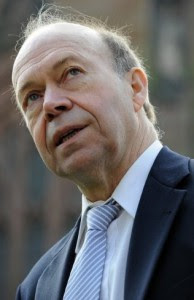 In August 2007, I submitted two Freedom of Information Act requests to NASA and its Goddard Institute for Space Studies (GISS), headed by long-time Gore advisor James Hansen and his right-hand man Gavin Schmidt (and RealClimate.org co-founder).

I did this because Canadian businessman Steve McIntyre — a man with professional experience investigating suspect statistical claims in the mining industry and elsewhere, including his exposure of the now-infamous “hockey stick” graph — noticed something unusual with NASA’s claims of an ever-warming first decade of this century. NASA appeared to have inflated its U.S. temperatures beginning in the year 2000. My FOIA request asked NASA about their internal discussions regarding whether and how to correct the temperature error caught by McIntyre.

NASA stonewalled my request for more than two years, until Climategate prompted me to offer notice of intent to sue if NASA did not comply immediately.

On New Year’s Eve, NASA finally provided the Competitive Enterprise Institute (CEI) with the documents I requested in August 2007.

The emails show the hypocrisy, dishonesty, and suspect data management and integrity of NASA, wildly spinning in defense of their enterprise. The emails show NASA making off with enormous sums of taxpayer funding doing precisely what they claim only a “skeptic” would do. The emails show NASA attempting to scrub their website of their own documents, and indeed they quietly pulled down numerous press releases grounded in the proven-wrong data. The emails show NASA claiming that their own temperature errors (which they have been caught making and in uncorrected form aggressively promoting) are merely trivial, after years of hysterically trumpeting much smaller warming anomalies.

As you examine the email excerpts below, as well as those which I will discuss in the upcoming three parts of this series, bear in mind that the contents of these emails were intended to prop up the argument for the biggest regulatory intervention in history: the restricting of carbon emissions from all human activity. NASA’s activist scientists leave no doubt in their emails that this was indeed their objective. Also, please note that these documents were responsive to a specific FOIA request from two years ago. Recent developments — combined with admissions contained in these documents — beg further requests, which have both been already filed and with more forthcoming.

Furthermore, on January 29, 2010, CEI filed our appeal of NASA continuing to improperly withhold other documents responsive to our FOIA requests. In this appeal we informed NASA that if they do not comply by the twentieth day, as required by law, we shall exercise our appellate rights in court immediately.

Under Dr. James Hansen, director of NASA’s Goddard Institute for Space Studies (GISS), NASA shepherds a continuing public campaign claiming clear evidence of anthropogenic global warming (AGW) — climate change induced by human beings. The documents released via the FOIA request, however, contain admissions of data unreliability that are staggering, particularly in light of NASA’s claims to know temperatures and anomalies within hundredths of a degree, and the alarm they helped raise over a mere one degree of claimed warming over more than an entire century.

Dr. Reto Ruedy, a Hansen colleague at GISS, complains in his August 3, 2007, email to his co-worker at GISS and RealClimate blogger Gavin Schmidt:

[The United States Historical Climate Network] data are not routinely kept up-to-date (at this point the (sic) seem to end in 2002).

This lapse led to wild differences in data claimed to be from the same ground stations by USHCN and the Global Climate Network (GHCN). NASA later trumpeted the “adjustments” they made to this data (upward only, of course) in extremely minor amounts — adjustments they are now seen admitting are well within any uncertainty, a fact that received significantly less emphasis in their public media campaign claiming anomalous, man-made warming.

Ruedy claimed this introduced an estimated warming into the record of 0.1 deg C. Ruedy then described an alternate way of manipulating the temperature data, “a more careful method” they might consider using, instead.