Finally, I think this is the first time I've come across an article on ABC , part of the "mainstream media", questioning the too-widely-held assumption that man's activities are responsible for global warming and/or climate change. A change in the amount of solar energy received by the Earth has always been the logical explanation for climate change. Here is more evidence pointing toward the sun.

A real inconvenient truth is global cooling could be harder to deal with than the global warming scare that has been hammered into us for decades. Stay tuned.
Peter 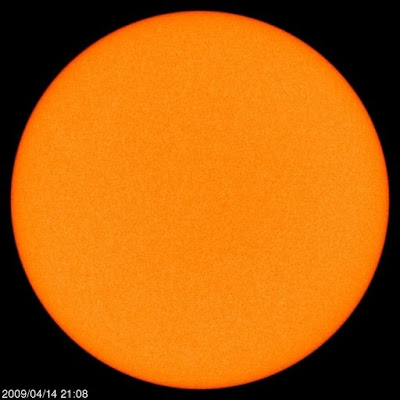 Written by Charles Osgood, The Osgood File
Tuesday, 21 April 2009
I know you've already got a lot to worry about as it is, but something rather odd is going on --- on the Sun.
The Sun normally undergoes an 11-year cycle of activity --- and last year, it was supposed to have heated up --- and, at its peak, would have a tumultuous boiling atmosphere, spitting out flares and huge chunks of super-hot gas.

Instead, it hit a 50-year low in solar wind pressure, a 55-year low in radio emissions, and a 100-year low in sunspot activity. Right now, the sun is the dimmest it's been in nearly a century.
Did you know that? It's true. Astronomers are baffled by it, but has the press covered the story? Hardly at all. Is the government doing anything about it? No, it's not even in the Obama budget or any Congressional earmarks.

But, sooner or later, I bet it will turn out to be our fault --- yours and mine. And in Washington, where everything is political, they'll note that it began before President Obama took office --- perhaps "another example of the failed policies of the Bush Administration."
At an upcoming meeting of astronomers in the United Kingdom, they'll be studying new pictures of the Sun taken from space, looking for any hint that the Sun will start heating up again and acting up again, the way it's supposed to. But there is no sign of that, so far.

In the mid-17th Century, there was a quiet spell on the Sun --- known as the Maunder Minimum --- which lasted 70 years, and led to a mini-Ice Age here on Earth.
Right now, global warming is a given to so many, it raises the question: Could another minimum activity period on the Sun counteract, in any way, the effects of global warming?

Hush, child! You're not even supposed to suggest that. The only thing that can change global warming is if we human beings --- we Americans, especially --- completely change our ways and our way of life.

I'm sure you'll be hearing more about this solar dimming business, now that the story is out. Remember, you heard it here first...

The Osgood File. Transcripts, podcasts, and Mp3's of all these programs can be found at theosgoodfile.com. I'm Charles Osgood on the CBS Radio Network.

Changing your life styles will be of no help at all in stopping global warming.

What has been shown to definitely
help in reducing the warming of the planet, is increasing taxes. Scientists through peer reviewed research have shown that this is a definite link.