The Climate AND Attitudes Are Changing!

Things sure get interesting when the mainstream media allows questions to be asked about the causes of the climate climate change phenomena usually blamed on man-caused global warming. In this case the common periods of draught in Australia receive an alternate explanation. Then given a chance, the fears of dying coral reefs, drowning polar bears, increased hurricanes, flooding, and heat waves will all be shown to be part of a natural, not man-caused, pattern of climate change.

Let us hope the following article is an example of a shift in attitude from one of Al Gore and Jim Hansen-type climate alarmism, to one of reason and common sense.
Peter

The climate sure is changing when doubt gets an airing
Written by Andrew Bolt, Melbourne Herald Sun
Tuesday, 21 April 2009

HMM, I could be wrong. Maybe the climate is changing after all. The intellectual climate, I mean. For years it's been a social crime to doubt man is heating the world to hell.

But suddenly the ice is cracking - and no, not the ice around Antarctica, which has actually grown. Take a few signs from last week alone. Australia's pre-eminent academic geologist, Prof Ian Plimer, published Heaven and Earth, challenging the gospel that the world is warming dangerously and that human-caused gases are to blame.

In fact, says Plimer, what warming we saw until a decade ago was not unusual, not dangerous and most likely caused mainly by solar activity. What's more, temperatures now seem to be falling.

While true, this kind of talk has been enough - until recently - to get you defamed as crazy or corrupt. Only last November, Plimer had a leper's bell rung over his head when he appeared on the ABC's Lateline Business, with presenter Ticky Fullerton warning he was "a geologist, not a climatologist" who "by definition works closely with the mining industry". Cross yourselves!
(When did the ABC last warn viewers that Al Gore "is an ex-politician, not a climatologist", and Tim Flannery "is a mammal expert, not a climatologist"?)

Then came Fullerton's "how-corrupt-are-you" question: "You are a greenhouse heretic . . . Is this scepticism genuine, or it it also about economic self-interest?"
(Has the ABC asked Flannery: "Is your warming belief genuine, or is it also about the $50,000 speaking fees?")

So what's changed? Perhaps not that much, but Sydney Morning Herald columnist Paul Sheehan, long a warming alarmist, did last week praise Plimer's book to the cooling heavens, and confess he could have been wrong in his own warming faith.

On Wednesday, another shock. The ABC's evangelical PM program did, true, report stock predictions of doom from alarmist scientists, but not before giving air time to two sceptical ones who'd given evidence to a Senate inquiry into the Rudd Government's planned emissions trading scheme.

And so listeners heard environmental engineer Prof Stewart Franks, say the West "has been railroaded into this notion of disastrous climate change for which there is no empirical evidence".

They also heard environmental geologist Prof Bob Carter warn that even if the world resumed warming, the Rudd scheme would at best cut temperatures by a thousandth of a degree, but at an insane cost.

And on Saturday came the final straw in the wind - even the ABC's AM gave Plimer an interview, albeit not without some alarmist at the end to "balance" his views as Flannery's never are.

By then Plimer's publisher had already sold an extraordinary 5000 copies of Heaven and Earth in just a week to a public clearly having second thoughts about all the warming hype.

By then, too, other researchers had given yet another reason to doubt.
The University of NSW Climate Change Research Centre has now found that our Big Dry is not unusual and not caused by global warming (as the Government insists), announcing: "The causes of southeastern Australia's longest, most severe and damaging droughts have been discovered, with the surprise finding that they originate far away in the Indian Ocean.

"A team of Australian scientists has detailed for the first time how a phenomenon known as the Indian Ocean Dipole - a variable and irregular cycle of warming and cooling of ocean water - dictates whether moisture-bearing winds are carried across the southern half of Australia."
This explanation "challenges the accepted understanding of the key drivers of Australia's climate", the centre added. No kidding? 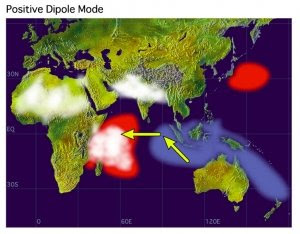 I hope the example of last week's three sceptical scientists - and of the NSW climate change researchers - inspires others to now cry that the emperor has no clothes. Or, rather, that he's wearing a jumper, it's got so cool.

You see, in just one week this month, I talked to three federal frontbenchers (two Labor), one prominent union leader and two media stars who all doubt man is warming the planet dangerously, but do not dare tell you. Indeed, I'd now reckon a quarter of Labor's frontbenchers and more than half of the Liberals' are closet sceptics.

It is tragic that so many smart people are too scared to say what they believe, especially when it's true. I blame most our crusading don't-argue media.

I wonder how much public opinion would turn against the warming scare if such sceptics came out and declared themselves. What a blow they'd strike not just for this country, but for reason.

But for now we still remain the prey of warming priests, carpet-baggers and the barking mad. The climate may be changing, but not enough for many sceptics to yet dare step outside.
Source
Posted by Peter at 11:00 PM

Thank you for saying how it really is. Explanations accounting for the hyperbolic, media fueled mass hysteria of this new-age eco-theocracy are many and varied. For my money, it's a mixture of new-age guilt coupled with the desire to replace secular materialism with a doctrinal belief in Gaia.

No doubt it will keep the sociologists of the far future, in their nuclear powered igloos, quite busy!

Crichton, Lomberg, Carter, Plimer et al. and all the rest who challenge the oxymoronic orthodoxy of 'consensus climate science' stand head and shoulders above their peers!

Everyone needs to speak out in order to defeat the myth of man-caused global warming. Thanks for your comments. Pass the word around.