A Prelude To What America Can Expect?

This is real folks. It is happening in Australia, but it can happen in America if we institute some (any) of the proposals coming from the Obama Administration. There is more than an economic cost to insane legislation such as "cap and trade". There are very real, and very dangerous human costs involved with raising energy costs. We had better start seriously questioning these things before we head down the path Australia is already on.
Peter

THE green jihad against airconditioners must stop. Too many elderly Australians have died already. 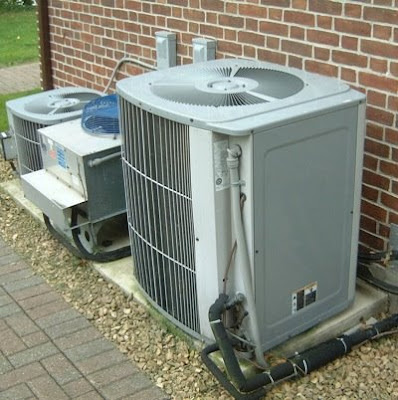 Victoria's chief health officer, Dr John Carnie, this week said some 374 Victorians may have been killed by the January heat wave, most of them old.
In South Australia, the toll is estimated at 80.
Just how many died because power blackouts knocked out their airconditioning is not known. And I doubt either government will ever say.

But what we are told is that both states now have plans to cut off the airconditioning - or make it too costly for pensioners to use - just when the heat is at its most lethal and the lives of the elderly hang in the balance.
True. But first the background.

Neither Victoria nor South Australia have built the infrastructure to cope with so many airconditioners in McMansions being turned on at the same time on a blistering day.
Building power stations is no longer sexy with so much global warming hysteria about, and investing in better power distribution wins few votes.

Thus both states risk blackouts when temperatures spike, which is why both governments ask you to turn off your airconditioner exactly when you want
it most. In Victoria, Deputy Premier Rob Hulls has urged people to avoid airconditioning. In South Australia, the Rann Government did the same as January's heatwave neared, citing environmental reasons.

It's the typical government response in these use less green times - to tell people to use less of what governments should actually provide more, whether water, power or land for urban housing.

Trouble is, airconditioning actually saves the lives of the elderly and sick. They are the first to die in extreme temperatures, as we saw as far back as Black Friday in 1939, when 438 people died from heat over just a few days, and despite the much smaller population.

That's why Council of the Ageing chief executive John Yates pleaded in January: "If you have air conditioning, use it ... It could be literally fatal for the older people not to."
Senior Victorians Minister Lisa Neville now concedes much the same, promising the Brumby Government will next time help councils cope with further heatwaves by "providing a cool place of respite" to older residents.

But in my house, Lisa, a "cool place of respite" is next to our airconditioner. So here's an idea: how about building a more reliable power supply and making airconditioners cheaper for the poor?
Sensible, you'd think. But not in a country so fiercely green that the Rudd Government has specifically banned schools from installing airconditioning with the $14 billion it's giving them to fix facilities and build school halls.
So here's what's planned instead.

Victoria will soon lead a national roll-out of smart meters meant to force us to use less power during the peak period - from 2pm to 8pm on working days, just when temperatures tend to be highest.

Charging extra for peak power will alone drive up the cost of ducted cooling to as much as $11 for those six hours - too high for some pensioners.
But worse is that the price could rocket even higher if the distributors want to slash demand to stop blackouts. Then ducted cooling could cost as much as $78 - a price few aged pensioners could afford.

Even worse is the plan by ETSA Utilities, South Australia's main electricity distributor, to install
remote-controlled switches in homes so it can turn off the compressors of airconditioners when power use is too high. As in during a heatwave.

So just as the heat gets too much for the old or weak, some technician in an ETSA office far away can cut their airconditioning with a flick of a switch.

That's potentially murder by remote control - simply because a government is too sluggish and green-crazed to build a power supply that will cope with hot days and keep people alive.
So hear the chant of the times? Save the planet! Kill a pensioner!
Source
Posted by Peter at 5:13 PM