A Cruel Despotism Has Been Unleashed On America

This really is utterly amazing, the declaration that carbon dioxide (CO2) is a "pollutant" and a danger to the health and well-being of all Americans. It is one thing to hear Al Gore ranting and raving about this, but now the nonsense comes from the Environmental Protection Agency. This is supposedly a governmental agency that employs honest scientists whose tax-payer funded jobs are to protect us. We naively assume they are above "politics", like our police, firemen, and military are supposed to be.

However, this is obviously not the case with the EPA. The Obama Administration and his hand-picked appointees to agencies like the EPA and the Interior Department, the Treasury, and others, seem hell-bent on controlling every aspect of American's lives. We've seen this now with the auto, banking and mortgage industries. Now they want to control the very energy we use. The EPA declaring CO2 a "pollutant" is the tool they're going to use. This is insanity and we who understand the science, and understand what a HOAX the entire man-caused global warming theory is must do all we can to stop this move now!

Search this blog, there is much supporting information here, and links to even more.
Peter

Stop the EPA Before it Destroys America! 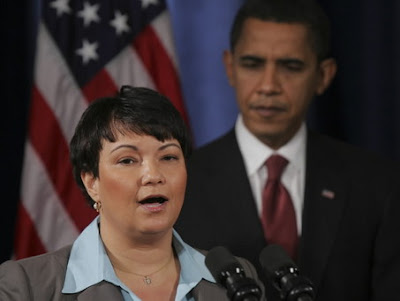 Jackson: Science be damned!
If the Environmental Protection Agency were some benign government unit tucked away in the corner of some massive federal government building, we could safely conclude it was doing its job to keep the nation’s air and water clean.
It is the very antithesis of that. It is a Green Gestapo that has wreaked havoc with all aspects of the nation’s industrial and agricultural communities, run roughshod over property rights, declared puddles to be navigable waters, and removed invaluable, beneficial chemicals from use to protect the lives and property of all Americans.

In much the same way as the FBI maintains a “Ten Most Wanted” list of criminals, so does the EPA.

Browner is presently the chief White House advisor to the President on environmental issues. The announcement that the EPA has declared carbon dioxide a “pollutant” and all so-called greenhouse gases a danger to human health and welfare now clears the way to regulate every single economic activity in the nation, most notably the emissions from automobiles.

The EPA is poised to further ruin the quintessentially American auto industry with regulatory power that will determine what kind of automobile Americans will be permitted to drive, limiting the use of internal combustion, and forcing the purchase of high cost hybrids and those run on massive batteries.

Naturally, the announcement was greeted with joy by the likes of the demented Speaker of the House, Rep. Nancy Pelosi, and a panoply of environment organizations such as the Environmental Defense Fund. The EDF hailed the announcement saying “The U.S. is taking its first steps as a nation to confront climate change.” Vickie Patton, EDF’s deputy general counsel, went on to say “Global warming threatens our health, our economy, and our children’s prosperity.”

Only there is NO global warming and there is NOTHING that the U.S. government or all the governments of all the nations of the world can do about “climate change.” This is a “threat” that does not exist!

What the EPA and other elements of government can and will do is use the international “global warming” hoax to pass new laws and more regulations to destroy the economic viability of all activities that utilize energy.

Here’s why CO2 and the so-called “greenhouse” gases do not perform a “greenhouse” function. As explained by retired analytical chemist, Hans Schreuder:
“With no atmosphere at all, our moon is very hot in sunshine (over 100°C) and very cold in the shade (less than minus 150°C).” “With earth receiving as good as the same amount of solar irradiation, our atmosphere thus acts as a cooling medium during the hours of sunshine and a blanket during the hours of darkness.”

“Global warming, global cooling and all climate change is caused by the daily revolutions of our earth around its own axis, throughout which time the varying amounts of heat gained during the day and similar variations of heat lost during the night make the weather what it is: ranging from plus 50°C to minus 50°C (even more extreme in places), unpredictable beyond a few days and at times violent or totally quiet.”

“That's quite apart from the seasonal differences caused by the annual trip around the sun and the varying distance that our planet revolves around our sun and we're not even considering even greater forces of influence.”

Throughout its history the EPA has deliberately distorted actual science to advance its own warped “environmental” agenda. This EPA ruling permits the government to control all aspects of CO2 emissions, short of the exhalation of CO2 by human beings. Humans emit CO2. Animals emit CO2. And energy use emits CO2. It is not a “pollutant” or a threat to health; it is a natural gas vital to all life on Earth via the process of photosynthesis by all plant life. Without CO2 all vegetation dies and with it all animal life.

Congress has a long record of restricting access to the nation’s vast reserves of coal, oil and natural gas. Our “dependency”; the importation of these energy sources is entirely the result of national policies. Now add thousands of regulations on all USE of energy.

Some will mark the announcement as the beginning of the decline of the American economy, but the U.S. government has long been engaged in all manner of control over everything required for a successful economy. What begins is the end to the abundant choices Americans have always had regarding the manufacture, distribution, and purchase of anything and everything common to our present lifestyle.

It is a cruel despotism that has been unleashed on all Americans.

Alan Caruba writes a daily blog at http://factsnotfantasy.blogspot.com
Posted by Peter at 4:27 PM